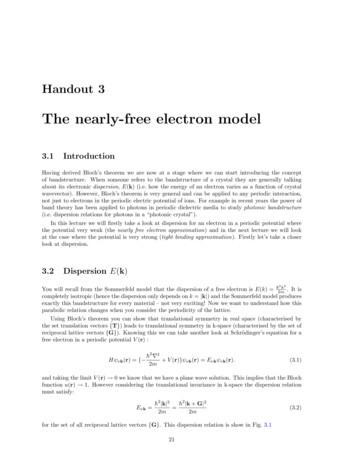 Handout 3The nearly-free electron model3.1IntroductionHaving derived Bloch’s theorem we are now at a stage where we can start introducing the conceptof bandstructure. When someone refers to the bandstructure of a crystal they are generally talkingabout its electronic dispersion, E(k) (i.e. how the energy of an electron varies as a function of crystalwavevector). However, Bloch’s theorem is very general and can be applied to any periodic interaction,not just to electrons in the periodic electric potential of ions. For example in recent years the power ofband theory has been applied to photons in periodic dielectric media to study photonic bandstructure(i.e. dispersion relations for photons in a “photonic crystal”).In this lecture we will firstly take a look at dispersion for an electron in a periodic potential wherethe potential very weak (the nearly free electron approximation) and in the next lecture we will lookat the case where the potential is very strong (tight binding approximation). Firstly let’s take a closerlook at dispersion.3.2Dispersion E(k)2 2kYou will recall from the Sommerfeld model that the dispersion of a free electron is E(k) h̄2m. It iscompletely isotropic (hence the dispersion only depends on k k ) and the Sommerfeld model producesexactly this bandstructure for every material – not very exciting! Now we want to understand how thisparabolic relation changes when you consider the periodicity of the lattice.Using Bloch’s theorem you can show that translational symmetry in real space (characterised bythe set translation vectors {T}) leads to translational symmetry in k-space (characterised by the set ofreciprocal lattice vectors {G}). Knowing this we can take another look at Schrödinger’s equation for afree electron in a periodic potential V (r) :Hψνk (r) { h̄2 2 V (r)}ψνk (r) Eνk ψνk (r).2m(3.1)and taking the limit V (r) 0 we know that we have a plane wave solution. This implies that the Blochfunction u(r) 1. However considering the translational invariance in k-space the dispersion relationmust satisfy:Eνk h̄2 k 2h̄2 k G 2 2m2mfor the set of all reciprocal lattice vectors {G}. This dispersion relation is show in Fig. 3.121(3.2)

3.4. CONSEQUENCES OF THE NEARLY-FREE-ELECTRON MODEL.23 bandgaps open up whenever E(k) surfaces cross, which means in particular at the zone boundaries.To see how these rules influence the properties of real metals, we must remember that each band inthe Brillouin zone will contain 2N electron states (see Sections 2.3 and 2.6), where N is the number ofprimitive unit cells in the crystal. We now discuss a few specific cases.3.4.1The alkali metalsThe alkali metals Na, K et al. are monovalent (i.e. have one electron per primitive cell). As a result,their Fermi surfaces, encompassing N states, have a volume which is half that of the first Brillouin zone.Let us examine the geometry of this situation a little more closely.The alkali metals have a body-centred cubic lattice with a basis comprising a single atom. Theconventional unit cell of the body-centred cubic lattice is a cube of side a containing two lattice points(and hence 2 alkali metal atoms). The electron density is therefore n 2/a3 . Substituting this inthe equation for free-electron Fermi wavevector (Equation 1.23) we find kF 1.24π/a. The shortestdistance to the Brillouin zone boundary is half the length of one of the Aj for the body-centred cubiclattice, which is11 2π 2π(1 12 02 ) 2 1.41 .2 aaHence the free-electron Fermi-surface reaches only 1.24/1.41 0.88 of the way to the closest Brillouinzone boundary. The populated electron states therefore have ks which lie well clear of any of theBrillouin-zone boundaries, thus avoiding the distortions of the band due to the bandgaps; hence, thealkali metals have properties which are quite close to the predictions of the Sommerfeld model (e.g. aFermi surface which is spherical to one part in 103 ).3.4.2Elements with even numbers of valence electronsThese substances contain just the right number of electrons (2N p) to completely fill an integer numberp of bands up to a band gap. The gap will energetically separate completely filled states from the nextempty states; to drive a net current through such a system, one must be able to change the velocity ofan electron, i.e move an electron into an unoccupied state of different velocity. However, there are noeasily accessible empty states so that such substances should not conduct electricity at T 0; at finitetemperatures, electrons will be thermally excited across the gap, leaving filled and empty states in closeenergetic proximity both above and below the gap so that electrical conduction can occur. Diamond(an insulator), Ge and Si (semiconductors) are good examples.However, the divalent metals Ca et al. plainly conduct electricity rather well. To see why this isthe case, consider the Fermi surface of the two-dimensional divalent metal with a square lattice shownin Figure 3.2. Initially, the free-electron Fermi surface is a circle with an area equivalent to the firstBrillouin zone (Figure 3.2(a)), which consequently straddles the Brillouin-zone boundary (Figures 3.2(b)and (c)). Figures 3.2 (d) and (e) show what happens when a weak periodic potential is “turned on”and bandgaps open up at the Brillouin-zone boundaries; the band gap raises the energy of the statesclose to the zone edge in Figure 3.2(c) and lowers those close to the zone edge in Figure 3.2(b) (seeFigure ?). For ease of reference, we shall call the former states “the upper band” and the latter states“the lower band”. Hence some electrons will transfer back from the upper band (the states above thegap) to the lower band (the states below it), tending to distort the Fermi surface sections close to theBrillouin-zone boundaries.In the situation shown in Figures 3.2(d) and (e), the material is obviously still an electrical conductor,as filled and empty states are adjacent in energy. Let us call the band gap at the centres of the Brillouinzone edges Egcent and that at the corners of the Brillouin zone Egcorn .2 The lowest energy states in theupper band will be at points ( πa , 0), (0, πa ), where a is the lattice parameter of the square lattice,with energyEgcenth̄2 π 2uElowest ,(3.8)2me a222 E cent and E corn will in general not be the same; two plane waves contribute to the former and four to the latter.ggHowever, the gaps will be of similar magnitude.

24HANDOUT 3. THE NEARLY-FREE ELECTRON MODELFigure 3.2: The evolution of the Fermi surface of a divalent two-dimensional metal with a square latticeas a band gap is opened at the Brillouin zone boundary: (a) free-electron Fermi surface (shaded circle),reciprocal lattice points (solid dots) and first (square) second (four isoceles triangles) and third (eightisoceles triangles) Brillouin zones; (b) the section of Fermi surface enclosed by the first Brillouin zone;(c) the sections of Fermi surface in the second Brillouin zone; (d) distortion of the Fermi-surface sectionshown in (b) due to formation of band gaps at the Brillouin-zone boundaries; (e) result of the distortionof the Fermi-surface section in (c) plus “folding back” of these sections due to the periodicity of k-space.i.e. the free-electron energy plus half the energy gap. Similarly, the highest energy states in the lowerband will be at the points ( πa , πa ), with energylEhighest Egcornh̄2 2π 2 ,2me a22(3.9)i.e. the free-electron energy minus half the energy gap. Therefore the material will be a conductor aslululong as Ehighest Elowest. Only if the band gap is big enough for Ehighest Elowest, will all of theelectrons be in the lower band at T 0, which will then be completely filled; filled and empty stateswill be separated in energy by a gap and the material will be an insulator at T 0.Thus, in general, in two and three dimensional divalent metals, the geometrical properties of thefree-electron dispersion relationships allow the highest states of the lower band (at the corners of thefirst Brillouin zone boundary most distant from the zone centre) to be at a higher energy than the loweststates of the upper band (at the closest points on the zone boundary to the zone centre). Therefore bothbands are partly filled, ensuring that such substances conduct electricity at T 0; only one-dimensionaldivalent metals have no option but to be insulators.We shall see later that the empty states at the top of the lowest band ( e.g. the unshaded states inthe corners in Figure 3.2(d)) act as holes behaving as though they have a positive charge. This is thereason for the positive Hall coefficients observed in many divalent metals (see Table 1.1).3.4.3More complex Fermi surface shapesThe Fermi surfaces of many simple di- and trivalent metals can be understood adequately by thefollowing sequence of processes.1. Construct a free-electron Fermi sphere corresponding to the number of valence electrons.2. Construct a sufficient number of Brillouin zones to enclose the Fermi sphere.

3.5. READING25Figure 3.3: The evolution of the Fermi surface of a divalent two-dimensional metal as a band gap isopened at the Brillouin zone boundary. (a) Free-electron Fermi circle and rectangular Brillouin zone;(b) the effect of a band gap opening up at the Brillouin-zone boundary; (c) resulting Fermi surfacesections in the extended-zone scheme.3. Split and “round off” the edges of the Fermi surface wherever it cuts a Brillouin-zone boundary(i.e. points at which band-gaps opens up).4. Apply the periodicity of k-space by replicating all of the Fermi-surface sections at equivalentpoints in the first Brillouin zone.These steps are illustrated in great detail for a number of cases in e.g. Solid State Physics, by N.WAshcroft and N.D. Mermin (Holt, Rinehart and Winston, New York 1976) Chapter 9.Note that the shape of the Brillouin zone has a profound effect on the Fermi surface sectionsgenerated, as shown by the Fermi surface of Figure 3.3. As in Figure 3.2, we have a divalent metal.However, in Figure 3.3, the Brillouin zone is rectangular, rather than square, so that the Fermi surfaceonly cuts two of the Brillouin zone edges. Thus, after band gaps have opened up, the Fermi surfaceconsists of a closed ellipse plus corrugated open lines, rather than the two closed sections of Figure 3.2.3.5ReadingAn expansion of this material is given in Band theory and electronic properties of solids, by John Singleton (Oxford University Press, 2001), Chapter 3. A more detailed treatement of traditional elementalmetals is given in Solid State Physics, by N.W Ashcroft and N.D. Mermin (Holt, Rinehart and Winston, New York 1976) Chapters 8, 9, 10 and 12 (even if you understand nothing of the discussion, thepictures are good). Simpler discussions are available in Electricity and Magnetism, by B.I. Bleaney andB. Bleaney, revised third/fourth editions (Oxford University Press, Oxford) Chapter 12, Solid StatePhysics, by G. Burns (Academic Press, Boston, 1995) Sections 10.1-10.21, Electrons in Metals and

A Method of Firing Nearly Invisible 2D Code with Public .