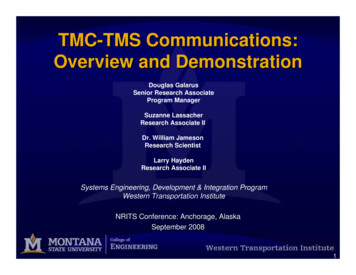 AbstractIn cooperation with the California Department of Transportation,Montana State University's Western Transportation Institute hasconducted an evaluation of communication technologies for applicationto TMC-TMS communications in Caltrans District 1. Wireless andwired technologies have been evaluated for prospective use, with prosand cons presented in general as well as site-specific analysis. Theresults of this study are applicable to other Districts and DOTS, for bothrural and urban use.2

DisclaimerThis is a research study and therecommendations and viewpoints presentedwithin do not necessarily represent thoseof the sponsor agency, the CaliforniaDepartment of Transportation.3

Original Caltrans Research Problem StatementRESEARCH PROBLEM STATEMENT #TS-507Caltrans Division of Research and Innovation2005-2006 Research Problem StatementsNovember 17, 2004I – Problem TitleImprove communications between TMC and TMS elements in a rural environment through a system that is deployablestatewide (2004MOB.10)II – Research Problem StatementThere is an unmet need for a reliable and economical communications system between TMS field elements and theTMC in rural areas. In the rural parts of most of the Districts telephone and cellular coverage is not available. Satellitecoverage is available in most areas but it is very expensive. In a rural environment, where communication is available,the costs are quite high, and data transfer rates and reliability are low.Why Research? The problem is hard. No-one has a one-size-fits-all solution – no “silver bullet”.4

Problem Origin (our understanding) Caltrans wanted to deploy TMS at Collier’s Tunnel on US 199 nearthe Oregon border. In the absence of other options, GPRS Ethernet modems were triedand didn’t work, even with a Yagi antenna. Environmental issues, some sort of tree fungus, prohibits microwavetowers from being installed in this area for fear of spreading thefungus. Similar and more difficult challenges exist throughout District 1.5

Later Visits:Redwood Forest Near CMS along US 1019

Background – D1Includes these counties inNorthwest California: Del Norte Humboldt Mendocino LakeDistrict 1 is responsible formaintaining 1,102.7 miles ofState highway and traversesterrain profiles ranging frommountainous to valley andlakeside to coastal terrains.The US 101 corridor runsnorth to south through District1 and is often characterizedas “the lifeline of the NorthCoast.”District 1 is characterized by redwoodforests and dense vegetation; ocean,riverside, and lakeside landscapes;and rugged mountain terrain. Highlevels of rainfall and fog in certainareas of the District pose uniqueroadway maintenance challenges. It isnot uncommon for Del Norte County toreceive up to 80 inches of rain peryear.The highest point in theDistrict is Snow MountainEast at 7,056 feet, located inLake County.12

Three factors that determinecommunication capabilities: Environment Power CommunicationsObviously, D1 is rural and faces challenges with respect to all of these.13

D1 ITS Architecture - OverviewA number of ITS elements are present in locations throughout CaltransDistrict 1. These elements perform a wide variety of tasks, rangingfrom collecting data (sensors, detectors) to disseminating information(CMS’, HAR), among other activities.14

D1 ITS Architecture – D1 TransportationManagement Center Coordinates transportation operations for north central California,serving Del Norte, Humboldt, Lake, and Mendocino counties. It is a Satellite Operation Center. The TMC performs a wide range of functions, including trafficsurveillance, incident detection and management support,environmental monitoring, information dissemination, data collectionand evacuation support. Given all of these functions, the TMC can be thought of as the hubto which numerous spokes (ex. field elements – CCTV, sensors,etc.) are connected.15

Case Study :CALTRANS DISTRICT 2 FIELD ELEMENT NETWORK/INTELLIGENTTRANSPORTATION SYSTEM (ITS) NODES District 2 is the best example of a rural communicationsnetwork deployment currently available. It has unique, key elements that District 1 might find ofinterest including:– a defined communications migration path,– a well-defined network topology consisting of a backbone andITS nodes,– and the use of IP based communications.23

Case Study : D2Hybrid Network with Migration Plan D2 initiated many of their sites using POTS or ISDN,depending on availability, with dial-on-demand routing. D2 implemented a private microwave network andcontinues to build out. Legacy sites are subsequentlymigrated to microwave. Initially, the network used engineered, point-to-point,unlicensed links. The next step in migration is to replaceunlicensed links with licensed.24

Case Study : D2Network Topology Microwave Backbone ITS Nodes – concept developed by D2 in 2001.Aggregating node that connects field elements andprovides communications back to the TMC. Roadside LAN – most electronics are housed in the ITSnode cabinet. Cat 5 and short distance fiber are used toextend Roadside LAN. 802.11 has been considered. All IP-Based25

Potential for Hybrid, IP-Based Network IP-based network provides flexibility in deployment andexpansion, enabling a “mix” of technologies. No one communication technology fully meets the needsof District 1. It shall be assumed that a “hybrid,” IP-based network isnecessary. Multiple topologies may be considered and used.26

Analysis of Communications TechnologiesEXAMPLE:IEEE 802.16 Worldwide Interoperability for Microwave Access (WiMax) Benefits include better coverage / range than Wi-Fi,mobility is an option with mobile Wi-Max, security ismore robust than Wi-Fi. Drawbacks include potential for interference, althoughlicensed options may be available. Applicable in sparsely populated areas with good line ofsite – roadside LAN with nodes located in closeproximity; may also be considered for gateway tobackbone links.28

Analysis of Communications TechnologiesEXAMPLE:The State of California Public Safety Microwave Network and theState of California Public Safety 800 MHz Network Benefits include existing site availability in much of D1. Drawbacks include network is generally not “capable” forapplication in much of D1; service cost where availablecan be significant. Applicability is generally limited at present, althoughfuture upgrades could change this. Co-location onexisting sites should be considered.29

Analysis of Communications TechnologiesEXAMPLE:Geostationary Earth Orbit (GEO) Satellite Systems (VSAT or similar) Benefits include availability in areas where other serviceis not available. Drawbacks include view of sky requirements; significantequipment and monthly service costs. Applicable where other options are not available fordirect TMC-TMS communications.30

TMS Site Analysis“Best Case” Backbone In the absence of a D1 “backbone,” theproject team chose to use the state800 MHz and Microwave sites aslocations of “best case” backbonenodes.Consistent with understanding that itwould be difficult/impossible to buildnew sites in D1.Could be augmented by co-locatingwith agencies at other sites.Examined 700 MHz and 900 MHzgateway to backbone propagation.NOTE: the majority of these sites arenot “capable” for this application atpresent. They are not all “connected”to form a single network.32

Example Site Analysis – US 199, Collier’s TunnelTelco - Landline POTS, DSL, and ISDN are currently not available at this site. Such service may be available at the rest area on the south side ofthe tunnel, but we have not been unable to confirm this. Since a camera at the rest area is not in service, it is assumed thatnone of these services are available there. We are unaware of other nearby service in proximity. We found it challenging to get further assistance/information fromTelcos 37

Example Site Analysis – US 199, Collier’s TunnelCellular – Obstruction to the North and on all sides45

Example Site Analysis – US 199, Collier’s TunnelCellular – Conclusion Cellular is not viable at this time for CCTV. (Includes possibility ofselecting nearby site for comm. and using relay.) Further expansion of cellular network would be required for servicein this location.46

Example Site Analysis – US 199, Collier’s TunnelState Network / Backbone There are two 800 MHz sites within two miles of Collier’s Tunnel. These sites are understood to be repeaters, with no externalconnectivity. Even if there was connectivity, they could only support low-data-rateservices – perhaps an RWIS. Propagation studies show that neither 700 MHz or 900 MHz couldbe used for direct connectivity. A relay (wired or wireless) would benecessary. (VHF or other lower frequencies would not beconsidered because they do not offer a sufficient data rate. Higherfrequencies would suffer from lack of line-of-sight.)47

Example Site Analysis – US 199, Collier’s TunnelState Network / Backbone - Conclusions At present, these sites are not usable. If future expansion adds external connectivity, then one of thesesites could be used. However, a relay would be necessary for“gateway” connectivity.49

Example Site Analysis – US 199, Collier’s TunnelSatellite and Other Meteor Scatter does not offer sufficient data rate for CCTV. LEO Satellite Services (Iridium, Globalstar, Orbcomm) do not offersufficient data rates for CCTV. Fixed GEO services may be considered. (HughesNet, Inmarsat,VSAT). Note that WildBlue is not considered because of anticipatedproblems with rain/snow.50

Example Site Analysis – US 199, Collier’s TunnelSatellite - Conclusions HughesNet offers the greatest chance for success of satellitesystems at this site. Siting is important because obstruction to the south (terrain andvegetation) may be problematic. Need to determine if available bandwidth is sufficient, including thepotential for throttling and congestion, and whether latency is anissue.54

Example Site Analysis – US 199, Collier’s TunnelOverall Conclusions The only service that could work at present is satellite. Care mustbe taken in siting. Cost and other issues may be problematic. Future expansion of state network or telco services, includingcellular, may increase options.55

Site AnalysisOverall Conclusions D1 provides many challenges, some may be insurmountable atpresent. (Collier’s Tunnel) The state networks (Microwave and 800 MHz) are of general benefitbecause of their sites, not necessarily the service. However, this isof no benefit without backhaul capability. Telco landline service, where available, may be the best option. Cellular service continues to expand, with increased service andbandwidth. The monthly charge may be an issue though. Satellite service could be considered as a last resort, but can beproblematic. There is no single “silver bullet” solution. There is no substitute for analysis by an RF engineer that accountsfor site-specific, organization-specific and time-sensitive detailsincluding present and anticipated future needs and capabilities.56

700 MHz Update The public safety D-block was not purchased in the recent FCCauction. It will likely re-surface, but that will take time. We estimatethat it would take up to 10 years to have a significant impact on D1.When in place, we anticipate that it could be used, as part of publicsafety, for this application. However, it is highly unlikely that it willprovide complete coverage of D1. Verizon Wireless was successful in acquiring the 700 MHz C-blockand plans to deploy a “4G” network using “long-term evolution(LTE)” technology. Considering Verizon’s recent expansion in D1,this could have a very positive impact in terms of capability andcoverage. Other efforts such as Sprint/Clearwire WiMax may have an impacttoo, but Verizon may have the upper hand here.57

Overall Conclusions There is no “silver bullet” solution. Sound engineering judgment and design are essential for developinga system that meets the needs of District 1. Strategies such as those used by District 2 to develop a hybrid, IPbased network with a clear migration plan are applicable and shouldbe used. There will still be locations such as Collier’s Tunnel in which there arefew if any viable options. The problem must be approached from a “systems” perspective,accounting for the entire system rather than isolated deployments.59

Improve communications between TMC and TMS elements in a rural environment through a system that is deployable statewide (2004MOB.10) II – Research Problem Statement There is an unmet need for a reliable and economical communications system between