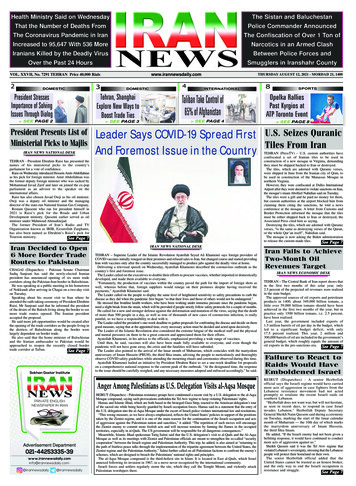 DOMESTICTHURSDAY AUGUST 12, 2021PRAYER TIMENoon (Zohr)Evening (Maghreb)Tomorrow’s Dawn (Fajr)Tomorrow’s Sunrise13:0920:1604:4906:22IRAN NEWS11. For each (such person) there are (angels) in succession, before and behind him: They guard him by command of Allah.Verily never will Allah change the condition of a people until they change it themselves (with their own souls).But when (once) Allah willeth a people’s punishment, there can be no turning it back, nor will they find,besides Him, any to protect.12. It is He Who doth show you the lightning, by way both of fear and of hope:It is He Who doth raise up the clouds, heavy with (fertilising) rain!Surah 13. The Thunder ( 11 - 12 )Tehran, ShanghaiExplore New Ways toBoost Trade TiesCanned Fish ExportsEarn Iran 24mIRAN NEWS ECONOMIC DESKIRAN NEWS ECONOMIC DESKTEHRAN – Tehran Chamber of Commerce, Industry, Mine andAgriculture (TCCIMA) and China Council for the Promotion ofInternational Trade Shanghai (CCPIT) in a webinar on jointtrade explored reviewed opportunities and capacities forpromoting and expansion of economic ties between Iran andChina and especially with Shanghai Zone.In the webinar which was held on Tuesday, the participants explored ways forbroadening economic cooperation between Iran and China and especially withShanghai. During the webinar, Head of TCCIMA Ms. Masoud Khansari raised somesuggestions for expansion of economic and commercial ties between Iran and Chinaand Head of CCPIT Mr. Zhou Minhao also announced the launch of the platform forShanghai virtual exhibition with cooperation of the e-trade website of AlibabaCompany and support of Shanghai Municipality, and stipulated that the platform canbe innovative ways for expansion of cooperation between Iranian economicenterprises with Shanghai.Addressing the webinar, Khansari pointed to the unilateral and unfair sanctions ofthe U.S. against Iran and some other countries like China, and called for taking a newand effective strategy for regulating relations between the aligned countries. He alsopointed to the 25-year cooperation agreement between Iran and China and noted thatthis opportunity should be used as a foundation for the infrastructural cooperationbetween the two states for long cooperation in the future. Khansari also underscoredthe development of ties between Iran and China under the project of One Belt andOne Road, adding that the private sector and especially the TCCIMA have plans onits agenda to concentrate on interactions with China’s provinces like Shanghai.Khansari also said the chamber is keen for the launch of a permanent connectionchannel between TCCIMA and CCPIT for expansion of ties and emphasized theexchange of the website links of these two private sector bodies of the two states forNIOC LaunchesMonitoring CenterTEHRAN (Shana) -- The monitoring center ofthe National Iranian Oil Company (NIOC),which was established with the aim ofcollecting, aggregating and displaying onlineand continuous data on production, domesticdistribution and foreign trade of oil, gas, gascondensate, gaseous liquids and naphtha, hasbeen launched officially.Iranian Oil Minister Bijan Zangeneh, NIOCCEO Masoud Karbasian and a number ofNIOC top-brass officials attended theNIOC central building to launch the centeron Sunday.Farrokh Alikhani, the NIOC Deputy CEO forProduction, who was in charge of theestablishment and operation of this center, saidthe system is aimed at streamlining decisionmaking at NIOC.In the real time monitoring center of theNIOC, all the data regarding oil and gasproduction zones and their quantity andquality and the flow of fluid from the origin tothe destination is fully known and the real timeamount of production is displayed online atany given time.“Based on the information of this center, theshare of each province, city and even facilitiesin oil and gas production is clear and thisinformation can help the National Iranian OilCompany in determining the share of eachfacility in the process,” the official said.Alikhani said the center was designed by anIranian representing a foreign company that wasemployed as the consultant to the project.3an easy and safe access of economic activists and traders of the both countries.He also called for activating the joint arbitration committee between the twocountries which has been agreed by the both sides and called it a necessity. He furthersaid that the draft for MoU on cooperation between TCCIMA and CCPIT has beenprepared and reminded that this cooperation document will be a new opportunity forenhancing improvement of the level of cooperation between the two countries.Then Zhou Minhao, for his part, said that Iran and China will celebrate their 50thanniversa

month of Muharram — the 10th day of which marks the martyrdom anniversary of Imam Hussein, the third Shia Imam. . accepted the proposal. the opening of the trade corridors as the people living in . the districts of Balochistan

Intentional blank page. Please continue to the next page.

REPORT ON THE HOLY SEE S INSTITUTIONAL KNOWLEDGE AND .

HOW TO PAGE A DOCUMENT IN MICROSOFT WORD