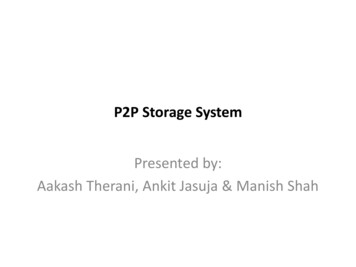 Cloud Storage v/s P2P Storage When data is stored at server clusters within the internet, this kindof data storage is referred to as cloud storage. Cloud Storage Products Amazon S3- Amazon S3 (Simple Storage Service) is a web service that offers cloudstorage through a simple HTTP-based interface. Dropbox- Dropbox is a cloud storage provider and file synchronization tool usingthe Amazon S3 storage facility as a back-end. When relying on the members of a group storing each other’sdata, it is called peer-to-peer (p2p) storage. P2P Storage Products Wuala- Wuala [37] is a commercial, distributed storage service that allows usersto trade storage capacity in a P2P way

Classification of Storage ProductsProducts can be classified based on the types of storage needs:1) Backup- Using the service as a backup facility for files stored locally on a computer(which is part of the peer network). This may involve keeping track of versions of files,as they change over time.2) File Synchronization- Keeping the same file tree that exists on a number ofdifferent computers in sync. When one file is changed on one computer, the copy ofthat file on the other computers is automatically updated. This type of functionalitymust deal with conflicts, e.g., in case the same file is changed on multiple computers atthe same time.3) Distributed file system-The online storage capacity is used to implement adistributed file system. One or more computers access the storage in a manner that isvery similar to local file systems .4) Content Sharing-Parts of the file tree stored online are used to share data withother people. By providing credentials to others, they can use the storage facility to readthe part of the tree they were granted access to .

OceanStore: An Architecture for Global-ScalePersistent Storage

Two Unique Goals1) Ability to be constructed from an untrusted infrastructure Servers may crash without warningAll information entering the infrastructure must be encryptedServers participate in protocols for distributed consistencymanagement2) Support for Nomadic Data Locality is of utmost importancePromiscuous Caching: Data can be cached anywhere, anytimeContinuous introspective monitoring to manage caching &locality

System Overview Persistent object: The fundamental unit in OceanStore Each object is named by a Globally Unique Identifier (GUID) Objects are replicated and stored on multiple servers Floating replicas: Replicas are independent of the server Two mechanisms to locate a replica1) A fast, probabilistic algorithm to find the object near therequesting machine2) If (1) fails, then it is located through a slower,deterministic algorithm

Access ControlOceanStore supports two primitive types of access controls1) Reader Restriction Encrypt non-public data and distribute the key to userswith read access Problem: There is no way to make a reader forget whathe has read2) Writer Restriction Through ACLs specified for each object by its owner Each user has a signing key, ACLs use that key forgranting accessNote: Reads are restricted at clients via key distribution, whilewrites are restricted at servers by ignoring unauthorized updates

Bloom Filters Based on the idea of hill-climbing If a query cannot be satisfied by a server, local information is useto route the query to a likely neighbor- Via a modified version of a Bloom filter

The Global Algorithm: Wide-Scale Distributed DataLocation Plaxton’s randomized hierarchical distributed data structure Resolve one digit of the node id at a time Links form a series of random embedded trees, with each node asthe root of one of these trees. Neighbor links can be used to route from anywhere to a given node If information about the GUID (such as its location) were stored atits root, then anyone could find this information simply by followingneighbor links until they reached the root node for the GUID.

Achieving Locality When a replica is placed somewhere in the system, its location is“published” to the routing infrastructure. The publishing process works its way to the object’s root anddeposits a pointer at every hop alongthe way. Each new replica only needs to traverse O(log(n)) hops to reach theroot, where n is the number of the servers When someone searches for information, they climb the tree untilthey run into a pointer, after which they route directly to the object.

Achieving Fault Tolerance Avoid failures at roots Each root GUID is hashed with a small number of different saltvalues Make it difficult to target a single GUID for DoS attacks If failures are detected, just jump to any node to reach the root OceanStore continually monitors and repairs broken pointers

Update: Format and Semantics An update: a list of predicates associated with actions A set of predicates is evaluated in order The actions of the earliest true predicate are atomically applied Update is logged if it commits or aborts. Predicates: compare-version, compare-block, compare-size, search Actions: replace-block, insert-block, delete-block, append

UpdatePath of an update:a)After generating an update, a client sends it directly to the object’s inner ringb)While inner ring performs a Byzantine agreement to commit the update, secondary nodes propagatethe update among themselvesc)The result of update is multicast down the dissemination tree to all secondary nodes

Update commitment Fault tolerance: Guarantees fault tolerance if less than one third of the serversin the inner ring is malicious Secondary nodes do not participate in the Byzantine protocol,but receive consistency information

A Direct Path to Clients and Archival Storage Updates flow directly from a client to the primary tier, where theyare serialized and then multicast to the secondary servers down thedissemination tree Updates are tightly coupled with archival Archival fragments are generated at serialization time, signed,encoded and distributed with updates

IntrospectionEvent handlers summarizes local events. These summaries arestored in a database. The information in the database is periodicallyanalyzed and necessary actions are taken. A summary is sent toother nodes.

MotivationBuild a distributed storage system: Scale Simple: key-value Highly available Guarantee Service Level Agreements (SLA)Service Level Agreements (SLA) Application can deliver its functionality in abounded time: Everydependency in the platform needs to deliver its functionality witheven tighter bounds. Example: service guaranteeing that it will provide a response within300ms for 99.9% of its requests for a peak client load of 500 requestsper second.

Partition Algorithm Consistent hashing: the output range of a hash function is treatedas a fixed circular space or ring. Virtual Nodes: Each node can be responsible for more than onevirtual node. Advantages of using virtual nodes If a node becomes unavailable the load handled by this node isevenly dispersed across the remaining available nodes. When a node becomes available again, the newly available nodeaccepts a roughly equivalent amount of load from each of the otheravailable nodes. The number of virtual nodes that a node is responsible can decidedbased on its capacity, accounting for heterogeneity in the physicalinfrastructure.

Data Versioning & Vector Clock A put() call may return to its caller before the update has been applied atall the replicas A get() call may return many versions of the same object. Challenge: an object having distinct version sub-histories, which thesystem will need to reconcile in the future. Solution: uses vector clocks in order to capture causality betweendifferent versions of the same object. A vector clock is a list of (node, counter) pairs. Every version of every object is associated with one vector clock. If the counters on the first object’s clock are less-than-or-equal to all ofthe nodes in the second clock, then the first is an ancestor of the secondand can be forgotten.

Execution1)2)3)Read / Write request on a key Arrives at a node (coordinator) Ideally the node responsible for the particular key Else forwards request to the node responsible for that key and that node will becomethe coordinator The first N healthy and distinct nodes following the key position are considered for therequest Quorums are used R – Read Quorum W – Write Quorum R W NWrites Requires generation of a new vector clock by coordinator Coordinator writes locally Forwards to N nodes, if W-1 respond then the write was successfulReads Forwards to N nodes, if R-1 respond then forwards to user Only unique responses forwarded User handles merging if multiple versions exist

(which is part of the peer network). This may involve keeping track of versions of files, as they change over time. 2) File Synchronization-Keeping the same file tree that exists on a number of different computers in sync. When one file is changed on one computer, the copy of that file

How to Setup Hik-Connect P2P Sevivce