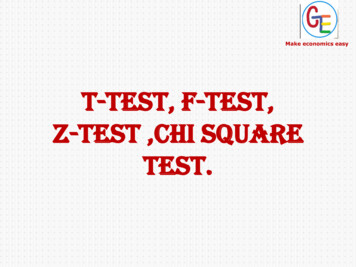 Uses of t-test/applicationSize of sample is small (n 30)Degree of freedom is v n-1T-test is used for test of significance of regressioncoefficient in regression model.In multiple regression with 3 individual variablethe regression coefficient are to be tested by- t-test.

To test the hypothesis that correlationcoefficient in population is zero then we usedt-test.We used t-statistics when parameter ofpopulation are normal.Population Variance are unknown.It is also called Welch t-test.

In z-test sample size is large (n 30)Z-test is used to determine whether twopopulation means are different ,whenPopulation variance is known.Z-test is based on standard normal distribution.Z-test is also called large sample test.

F-test is use by comparing the ratio of22the two variance S1 & .S1The samples must be independent.F-test never be –ve because upper value is2greater than lower. S12S2Testing of overall significance of regression by –F-test.Test for the significance of the adjustedcoefficient of multiple determination is –F-Test.

Chi square test Χtest is sampling analysis for testing significance of population variance. 2 Chi square is non parametric test, it can be used for test of goodness of fit r . Chi square test is use simple random sampling method. Χtest is introduced by- Karl Pearson. 2

What is it about? - Jo's Cervical Cancer Trust