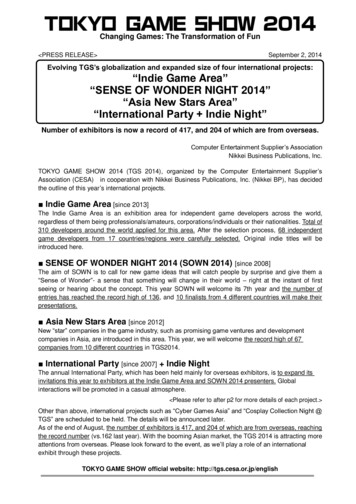 Changing Games: The Transformation of Fun PRESS RELEASE September 2, 2014Evolving TGS’s globalization and expanded size of four international projects:“Indie Game Area”“SENSE OF WONDER NIGHT 2014”“Asia New Stars Area”“International Party Indie Night”Number of exhibitors is now a record of 417, and 204 of which are from overseas.Computer Entertainment Supplier’s AssociationNikkei Business Publications, Inc.TOKYO GAME SHOW 2014 (TGS 2014), organized by the Computer Entertainment Supplier’sAssociation (CESA) in cooperation with Nikkei Business Publications, Inc. (Nikkei BP), has decidedthe outline of this year’s international projects. Indie Game Area [since 2013]The Indie Game Area is an exhibition area for independent game developers across the world,regardless of them being professionals/amateurs, corporations/individuals or their nationalities. Total of310 developers around the world applied for this area. After the selection process, 68 independentgame developers from 17 countries/regions were carefully selected. Original indie titles will beintroduced here. SENSE OF WONDER NIGHT 2014 (SOWN 2014) [since 2008]The aim of SOWN is to call for new game ideas that will catch people by surprise and give them a“Sense of Wonder”- a sense that something will change in their world – right at the instant of firstseeing or hearing about the concept. This year SOWN will welcome its 7th year and the number ofentries has reached the record high of 136, and 10 finalists from 4 different countries will make theirpresentations. Asia New Stars Area [since 2012]New “star” companies in the game industry, such as promising game ventures and developmentcompanies in Asia, are introduced in this area. This year, we will welcome the record high of 67companies from 10 different countries in TGS2014. International Party [since 2007] Indie NightThe annual International Party, which has been held mainly for overseas exhibitors, is to expand itsinvitations this year to exhibitors at the Indie Game Area and SOWN 2014 presenters. Globalinteractions will be promoted in a casual atmosphere. Please refer to after p2 for more details of each project. Other than above, international projects such as “Cyber Games Asia” and “Cosplay Collection Night @TGS” are scheduled to be held. The details will be announced later.As of the end of August, the number of exhibitors is 417, and 204 of which are from overseas, reachingthe record number (vs.162 last year). With the booming Asian market, the TGS 2014 is attracting moreattentions from overseas. Please look forward to the event, as we’ll play a role of an internationalexhibit through these projects.TOKYO GAME SHOW official website: http://tgs.cesa.or.jp/english

News Update Mr. Alex Dale, Chief Marketing Officer from King,joins TGS Forum 2014 Keynote Session!Mr. Alex Dale, Chief Marketing Officer from King.com Ltd., will join the panel discussion at the KeynoteSession (Part I). For details, please refer to the official website. http://tgs.cesa.or.jp/forum/BiographyAlex DaleChief Marketing Officer,King.com Ltd.Alex joined King from Microsoft, where he was general manager oftheir consumer and online services group in Central and EasternEurope.At Microsoft, Dale also led the consumer marketing efforts for Bing,Internet Explorer, Windows Phone, Windows PC, MSN and Hotmailin Western Europe.Prior to Microsoft, he was the founder and managing director of broadband ISP and portal,virgin.net. Part of the Virgin Group of companies, the virgin.net service was sold to NTL Cablein 2004.Dale received a bachelor of arts from Oxford University and a masters degree in businessadministration from the Imperial College in London.2

“SENSE OF WONDER NIGHT 2014” Outline [Friday, September 19]The SOWN 2014 called for applications from May 2014 and received the record high of 136 entries,exceeding the last year’s 125 entries. The selection committee has selected 10 titles from these entries.2 titles from Japan, 5 titles from the U.S., 2 titles from Australia and 1 title from Singapore will bepresented.This year, as indie games pick up stream, the event start time has been changed, and the venue hasexpanded from last year and will be held at the Event Stage in Hall 8. The presentations will bebroadcasted live via the official video channel.Also, titles presented this year are scheduled to be exhibited in the “Indie Game Area” during the TGSso that the audiences will have an opportunity to play the games while talking to the developersdirectly.- Date: September 19 (Friday) 14:00 to 16:00 (tentative)* The schedule has changed so that it’ll be held during TGS opens.- Venue: Hall 8 Event Stage* Business Day pass or PRESS pass is required for admission.* Pre-registration is required for a PRESS pass. Please see the “For Press” section on theofficial website.- Cooperation by: International Game Developers Association Japan (IGDA Japan)- Special sponsored by: Sony Computer Entertainment Inc.- Other sponsored by: Google, Nintendo Co., Ltd.- Official website: http://tgs.cesa.or.jp/sown/Presenters at SOWN 2014TitlePresenterTeamCountry8BitMMORobby ZinchakArchive EntertainmentUnited StatesChainedKeith LeikerDigiPen Team ThoseGuysUnited StatesDubWarsJoe AlbrethsenMURA Interactive IncUnited StatesExpandChris Johnson /ChrisLarkinFILLYoichi HayashiYO1 KOMORI GAMESLURKINGJustin Ng Guo XiongDIGIPEN INSTITUTE OFTECHNOLOGYSINGAPORESingaporeMiegakureMarc ten Boschmtb design works, Inc.United StatesPICOLECITTATECOPush Me Pull YouStuart Gillespie-CookHouse HouseSpeedRunnersLuke BurtistinyBuild GamesAustraliaJapanJapanAustraliaUnited States(*alphabetical order)5

“Asia New Stars Area” Outline [opens Business Days]The “Asia New Stars Area” welcomes its 3rd year this year, and isan area where new star companies in the game industry, such aspromising game ventures and developing companies in Asiaoutside Japan, are introduced to the Japanese game industry.This year, the record high of 67 companies from ASEAN 10countries (last year: 60 companies from 10 countries) will exhibit inthis area.The ASEAN Pavilion will be held by ASEAN-JAPAN CENTRE and others this year as well. 57companies/ organizations will participate in this pavilion from all 10 of ASEAN participating countries. Indonesia INDONESIA GAME & ART STUDIOS will make its debut by the support of the Ministry of Tourism andCreative Economy, Republic of Indonesia. 3D design companies such as Anantarupa Studios andKidalang as well as the representative game developing companies such as Artoncode and Touchtenwill exhibit in this area, supporting various business needs. Singapore Singapore’s game industry is expected to grow as a hub at South East Asia, and 5 companies includingthe indie game developers such as Daylight Studios, Inzen Studio and Witching Hours Studios willparticipate. Thailand Thailand is attracting attention as a gaming market and 5 companies that excel at mobile gamedevelopment, IT solution and character licensing will participate. The Philippines The Philippines has been the receiving end of outsourcing from European/U.S. companies for a longtime. 7 companies that provide service for various game development needs such as multi-platformsoftware development, game art, game animation and mobile game development will participate. Vietnam GLASS EGG DIGITAL MEDIA is a game outsourcing studio based in the city of Ho Chi Minh, Vietnam.It outsources in-game arts (for 2D or 3D, background, characters, vehicles, other modeling andtexturing). It is a main member of the IGDA Vietnam. Malaysia This year, in addition to Malaysia’s representative CG, 3G mobile game companies such as LemonSky Animation and Tomato Animation, 11 companies that excel at animation production and mobilegame development with the support by the government agency/multi-media development bureau(MDec) will participate.Other than above, Cambodia, Laos, Myanmar, Brunei Darussalam and other emerging countries willparticipate. Companies that excel at mobile games, digital content development and illustrations arescheduled to exhibit in this area.6

invitations this year to exhibitors at the Indie Game Area and SOWN 2014 presenters. Global interactions will be promoted in a casual atmosphere. Please refer to after p2 for more details of each project. Other than above, international projects such as “Cyber Games Asia” and “Cosplay Collection Night @ TGS” are scheduled to be held.

The Sense of Style: The Thinking Person’s Guide to Writing .

Welcome to the Waterloo Recreation Area!