The Great Serpent Mound And The . - Crop Circle 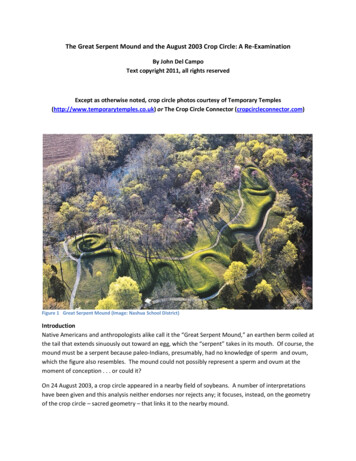 The Great Serpent Mound and the August 2003 Crop Circle: A Re-ExaminationBy John Del CampoText copyright 2011, all rights reservedExcept as otherwise noted, crop circle photos courtesy of Temporary Temples(http://www.temporarytemples.co.uk) or The Crop Circle Connector (cropcircleconnector.com)Figure 1 Great Serpent Mound (Image: Nashua School District)IntroductionNative Americans and anthropologists alike call it the “Great Serpent Mound,” an earthen berm coiled atthe tail that extends sinuously out toward an egg, which the “serpent” takes in its mouth. Of course, themound must be a serpent because paleo-Indians, presumably, had no knowledge of sperm and ovum,which the figure also resembles. The mound could not possibly represent a sperm and ovum at themoment of conception . . . or could it?On 24 August 2003, a crop circle appeared in a nearby field of soybeans. A number of interpretationshave been given and this analysis neither endorses nor rejects any; it focuses, instead, on the geometryof the crop circle – sacred geometry – that links it to the nearby mound.

CropcircleSerpentMoundFigure 2 Image Copyright 2003, Chris SteeleVesica PiscesOne cannot look upon the crop circle without being struck by the “cats-eye” – vesica pisces – that somecharacterize as a pointer; though what it points to is disputed: the circle-in-circle that lies just beyond orthe “Indian” mound three thousand feet away, or both?But that’s just a first glance for on closer inspection, thecats-eye, itself, lies within a cats-eye; that is to say, oneobserves a vesica pisces within vesica pisces. Does thismean something? What?If one accepts vesica pisces as representing the “eternalfeminine,” then is it significant that one vesica pisces isinscribed within another? In mathematics, the product oftwo positive integers is positive; and the product of twonegative integers is likewise positive. But this is geometry,not mathematics; is there any conceivable correlation?What? How does one multiply (divide, add or subtract)one geometrical figure by another?2Figure 3 Image copyright 2003, Jeffrey Wilson andRoger Sugden

Now, let’s return to the pointer. If the inner vesica pisces is indeed a pointer, then it’s axis points in twodirections (owing to bilateral symmetry): to the outer circle-in-circle (time-honored symbol for Sol, oursun); and not so obviously, to the small disk opposite the sun symbol. The small disk is matched by twoothers (at either corner of the eye) that, together with the sun symbol, mark the four cardinal directions,with the sun symbol marking due west. Viewed in this way, the inner vesica pisces, like the spinner on acompass, orients us to “ground truth.”A line extended from the eastern disk to the sun symbol crosses the inner vesica pisces on its axis, whichif extended, intersects the serpent mound. It would seem the crop circle does, indeed, point west,through the sun to the mound.Figure 4 Image Copyright 2003, Chris SteeleWhat to make of it? Three disks and three circles-in-circles, two defining vesica pisces, the smaller ofwhich points to the ancient mound via Sol?Coincidental alignment? The case for reconsiderationLet’s begin by asking whether the crop circle could appear in proximity to the ancient effigy and yet havenothing to do with it? “No, inconceivable,” for in addition to the proximity of the two, there are noother symbolic objects vying for our attention; therefore, one would have to deliberately ignore not justthe proximity of the two artifacts, but their obvious commonality: both were created, evidently, forsymbolic purposes by sentient, intelligent beings who intended that they be observed by other sentient,intelligent beings. More precisely, each is symbolic/purpose-built – one enduring, the other transient –for no apparent reason other than to be observed and contemplated.And so, there is ample reason to believe that the transient crop circle (yin) redirects our attention to theenduring mound (yang), as if suggesting the mound, which has for centuries drawn the attention ofnatives and settlers alike, deserves reconsideration; that while the morphology of the mound isindisputably serpentine, the creature it depicts is not indisputably a serpent; other interpretations,perhaps equally valid, are possible.3

In this sense, the circle-makers seem to draw our attention to changing perceptions over time; toconsider that things one day perceived to be X may, at another time be perceived as Y or even XY,though nothing has changed; except, our perception. Consider that our solar system never changedfrom Ptolemaic to heliocentric, only our perception of it. Does this not capture in an ideaistic, vicerepresentational, way the notion of yin and yang . . . or stereo isomers . . . each a reflection of itsopposite, alike and yet different . . . two opposing things in one thing? Might this crop circle symbolizethings that are apparently opposed, but actually complementary, like yin and yang, male and female;perhaps the human chromosome itself, X and Y, locked in a laddered, helical embrace?!The mound could easily represent sperm and ovum at the moment of conception; except, that paleoIndians presumably knew nothing about the biology of reproduction at a microscopic level.Well, it’s an interesting conjecture, but conjecture just the same; certainly we can take it no farther. Orcan we?Serpent and egg or sperm and ovum?Four years earlier, on 5 August 1999 another cropcircle appeared in a wheat field near Barbury Castle,England, in Wiltshire County. It was evocative of theSerpent Mound; except, the serpent head was spermlike (small and slender in proportion to the body) andthe egg, like an ovum opening its outer membrane atthe moment of conception. Was this a clue to reexamine the Great Serpent Mound; to consider itafresh? And if we missed this clue (our first) was the2003 crop circle in Ohio our second?Figure 6 Image: Fantom-XPRecall the vesica pisces of the Ohio crop circle. Thoughfrequently called a “cats-eye,” the irises of severalFigure 5 Image Copyright 1999, Steve Alexanderother species take the same shape, including someserpents. And what does the serpent represent but ancient wisdom? Is it possible that the 2003 crop4

circle in Ohio represents Sophia, the “oh, so feminine” serpent of wisdom and her eye leads us throughthe sun – radiant light to illumine the mind’s-eye – to the mound; thus, redirecting not just eyes butthoughts, as well, causing us to reconsider things about which we are certain?!It works on multiple levels, doesn’t it? Yin and yang expressed over and again, not in familiarsymbology, but ideaistically; a serpent’s eye that calls attention to a serpentine form, causing usquestion whether we have not been misled by biological eyes that see a thing and mistake it forsomething it is not; seeing the form only, not what it represents – life-giving conception – an ideaperceptible only in the mind’s eye!Well, this is even more intriguing, but more conjectural too. Besides, paleo-Indians, presumably, builtthe mound? Or did they?! Are there other clues?The Grave Creek Mound and its controversial stoneFigure 7 Grave Creek Mound (Image: West Virginia Division of Culture and History)Today, at Moundsville, West Virginia, on the banks of the Ohio River, there is a large earthen mound, apresumed paleo-Indian artifact, called the Grave Creek Mound. The archaeological communityconsiders it and similar earthen artifacts, such as the Great Serpent Mound, to have been erected by amound-building Indian or paleo-Indian culture that inhabited much of the Central United States,including the Ohio River Valley.In 1838, a small engraved stone was excavated from the Grave Creek Mound and drew immediateinterest and controversy. The Grave Creek Stone bore etched markings that were evocative of letters orsymbols. The stone cannot be examined today, because its current location is unknown; however, aphotograph is preserved by the Smithsonian Institute (see below), and plaster and wax castings werealso made.5

Figure 8 The Grave Creek StoneSmithsonian photograph 90-9022(MS 3146, E.H. Davis Collection, National Anthropological Archives)Multiple researchers have, over the years, attempted to decrypt the markings, not without controversy,including allegations of hoax; that the Grave Creek Stone was deliberately planted for excavators to“discover.” That said, many believe the stone to be genuine; the fact that it was excavated from themound is not in dispute.Assuming it’s genuine, what does it say, if anything? Multiple decryptions have been offered, allcontroversial, including one by Dr. Barry Fell, the great, controversial, Harvard professor and epigrapher.Fell identified the writing as ancient Ibero-Punic, a language shared by ancient Phoenicians andCarthaginians. The latter are believed to have emigrated across the Mediterranean, establishingsettlements in Malta, Sicily, North Africa, the Iberian Peninsula and what is today Brittany, making thempossible ancestors of modern-day Celts.In each location, they left cultural artifacts, includingstanding stones, dolmen, and stone chambers.Furthermore, the existence of standing stones, dolmenand stone chambers, as well as earthen structures, such asbarrow mounds, is well documented in England andthroughout the British isles, giving reason to suspect thatancestors of modern Celts crossed from what is todayBrittany into southern England and beyond.Fell’s identification of possible Ibero-Punic writing on theGrave Creek Stone gives reason to suspect that Ibero-Punicpeoples or Celts journeyed as far as the Ohio River Valleywhen it was roamed by paleo-Indians; and perhaps intermingling occurred.Figure 9 Round Barrow (Image Copyright 2009,Steve Alexander)Prehistoric intermingling; the great controversyFor those not already familiar with the controversy, it should now be obvious; the recovery of an IberoPunic artifact from a paleo-Indian mound in Ohio implies the mound-builders were possibly of Europeanorigin or, at least, interacted with people from the European Continent.6

In other words, even if not themselves Europeans, the mound-builders acquired cultural artifactsproduced by peoples of European extraction with whom they mingled. One such artifact, arguably, wasproduced contemporaneously with the Grave Creek Mound and entombed within it as a memorial. Fellstranslation of the Grave Creek Stone follows:The mound raised-on-high for TasachThis tile(His) queen caused-to-be-made.Figure 10 Photocopy of Seth Eastman drawing of Grave Creek StoneHenry R. Schoolcraft Indian Tribes of the United States, 1850,by way of Barnhart (1986)There are two acid tests for any theory: replicability and predictability. If the Grave Creek Mound, andperhaps other mounds of the Ohio River Valley, were erected by Europeans or people who shared theland with Europeans, intermingling with them (perhaps interbreeding), and sharing cultural artifacts andspiritual beliefs, as well, then more such artifacts should be found in or nearby the ancient mounds.Is this the puzzle the circle-maker(s) would have us solve?ConclusionThat the appearance of a crop circle in a field adjacent to the Great Serpent Mound might be acoincidence strains credulity beyond the limit; the circle-maker(s) almost certainly wished to draw ourattention to the Great Serpent Mound, causing us to question and reconsider all that we think we knowabout it.If, furthermore, this is the puzzle the circle-maker(s) wish to draw our attention to, then there is reasonto suspect that one or more Ibero-Punic artifacts may lie hidden within the Great Serpent Mound;perhaps, within the egg.And this brings us suddenly full-circle back; for if the Great Serpentine Mound is really about conceptionand the mystery of life, as it appears to be, then the egg is very special – possibly, the Orphic Egg. And inthat case, might the sperm, in a final serpentine twist, be a serpent after all? Is it Sophia, the serpent ofdivine wisdom, devouring what was not intended for our human eyes?!7

On 24 August 2003, a crop circle appeared in a nearby field of soybeans. A number of interpretations have been given and this analysis neither endorses nor rejects any; it focuses, instead, on the geometry of the crop circle

PRAYER OF REPENTANCE FOR KUNDALINI