Determining The Types Of Diatoms Padang River And 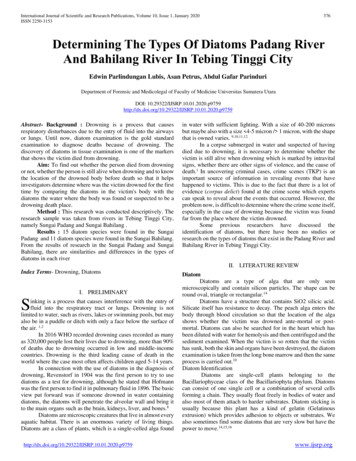 International Journal of Scientific and Research Publications, Volume 10, Issue 1, January 2020ISSN 2250-3153376Determining The Types Of Diatoms Padang RiverAnd Bahilang River In Tebing Tinggi CityEdwin Parlindungan Lubis, Asan Petrus, Abdul Gafar ParinduriDepartment of Forensic and Medicolegal of Faculty of Medicine Universitas Sumatera UtaraDOI: 0.29322/IJSRP.10.01.2020.p9759Abstract- Background : Drowning is a process that causesrespiratory disturbances due to the entry of fluid into the airwaysor lungs. Until now, diatom examination is the gold standardexamination to diagnose deaths because of drowning. Thediscovery of diatoms in tissue examination is one of the markersthat shows the victim died from drowning.Aim: To find out whether the person died from drowningor not, whether the person is still alive when drowning and to knowthe location of the drowned body before death so that it helpsinvestigators determine where was the victim drowned for the firsttime by comparing the diatoms in the victim's body with thediatoms the water where the body was found or suspected to be adrowning death place.Method : This research was conducted descriptively. Theresearch sample was taken from rivers in Tebing Tinggi City,namely Sungai Padang and Sungai Bahilang .Results : 15 diatom species were found in the SungaiPadang and 11 diatom species were found in the Sungai Bahilang.From the results of research in the Sungai Padang and SungaiBahilang, there are similarities and differences in the types ofdiatoms in each riverin water with sufficient lighting. With a size of 40-200 micronsbut maybe also with a size 4-5 micron / 1 micron, with the shapethat is owned varies. 9,10,11,12In a corpse submerged in water and suspected of havingdied due to drowning, it is necessary to determine whether thevictim is still alive when drowning which is marked by intravitalsigns, whether there are other signs of violence, and the cause ofdeath.1 In uncovering criminal cases, crime scenes (TKP) is animportant source of information in revealing events that havehappened to victims. This is due to the fact that there is a lot ofevidence (corpus delict) found at the crime scene which expertscan speak to reveal about the events that occurred. However, theproblem now, is difficult to determine where the crime scene itself,especially in the case of drowning because the victim was foundfar from the place where the victim drowned.Some previous researchers have discussed theidentification of diatoms, but there have been no studies orresearch on the types of diatoms that exist in the Padang River andBahilang River in Tebing Tinggi City.II. LITERATURE REVIEWIndex Terms- Drowning, DiatomsI. PRELIMINARYSinking is a process that causes interference with the entry offluid into the respiratory tract or lungs. Drowning is notlimited to water, such as rivers, lakes or swimming pools, but mayalso be in a puddle or ditch with only a face below the surface ofthe air. 1,2In 2016 WHO recorded drowning cases recorded as manyas 320,000 people lost their lives due to drowning, more than 90%of deaths due to drowning occurred in low and middle-incomecountries. Drowning is the third leading cause of death in theworld where the case most often affects children aged 5-14 years.In connection with the use of diatoms in the diagnosis ofdrowning, Revenstorf in 1904 was the first person to try to usediatoms as a test for drowning, although he stated that Hofmannwas the first person to find it in pulmonary fluid in 1896. The basicview put forward was if someone drowned in water containingdiatoms, the diatoms will penetrate the alveolar wall and bring itto the main organs such as the brain, kidneys, liver, and bones.8Diatoms are microscopic creatures that live in almost everyaquatic habitat. There is an enormous variety of living things.Diatoms are a class of plants, which is a single-celled alga 9759DiatomDiatoms are a type of alga that are only seenmicroscopically and contain silicon particles. The shape can beround oval, triangle or rectangular.14Diatoms have a structure that contains SiO2 silicic acid.Silicate itself has resistance to decay. The peach alga enters thebody through blood circulation so that the location of the algashows whether the victim was drowned ante-mortal or postmortal. Diatoms can also be searched for in the heart which hasbeen diluted with water for hemolysis and then centrifuged and thesediment examined. When the victim is so rotten that the victimhas sunk, both the skin and organs have been destroyed, the diatomexamination is taken from the long bone marrow and then the sameprocess is carried out.10Diatom IdentificationDiatoms are single-cell plants belonging to theBacillariophyceae class of the Bacillariophyta phylum. Diatomscan consist of one single cell or a combination of several cellsforming a chain. They usually float freely in bodies of water andalso most of them attach to harder substrates. Diatom sticking isusually because this plant has a kind of gelatin (Gelatinousextrusion) which provides adhesion to objects or substrates. Wealso sometimes find some diatoms that are very slow but have thepower to move.14,15,16www.ijsrp.org

International Journal of Scientific and Research Publications, Volume 10, Issue 1, January 2020ISSN 2250-3153It is called a diatom because the cell consists of two valves(two atoms), where one covers the other like a can of pastilles.Diatoms are generally unicellular (solitary), but in some speciessame live in colonies and co-operate with one another. From itsshape, diatoms are divided into two orders based on their shape,namely circular diatom cells (Centrales diatoms) and elongateddiatom cells (Pennales diatoms). The Central Order when viewedfrom above or below is symmetrical and circular in a radial shape.The cells can be round, oval, cylindrical, with a round, triangularor rectangular cross-section, while the Pennales Order islongitudinal or sigmoid shaped like the letter "S". Along with themedian diatom cell fatigue there is a middle lane called rafe(raphe) .17,18Diatom classification according to their lifestyle is alsodivided into 8 groups, namely: Epiphytic, Episamic, Epipelic,Endopelic, Epilithic, Endolithic, Epizoic, Fouling. 14,16,18Diatom Growth FactorDiatom distribution varies which is determined byenvironmental factors that influence. The distribution that affectsdiatoms horizontally include the following: temperature, waterflow and turbidity factors.19DrowningDefinisiDrowning is usually defined as death from asphyxiacaused by the entry of fluid into the respiratory tract. In one casethe victim sank in the water so that his respiratory system wasdisrupted by the result of loss of consciousness and threat to thevictim's soul.1In general, drowning is a case of an accident, either directlyor because there are certain factors such as the victim being drunkor under the influence of drugs, it could even be due to the resultof a murder event. Every year, around 150,000 deaths are reportedworldwide due to drowning, with annual occurrences perhapscloser to 500,000. Some of the most populous countries in theworld fail to report near drowning incidents. This suggests thatmany cases have never been brought to medical attention, eventsaround the world make an accurate approach almostimpossible.16,17Drowning diagnosisUntil now, diatom examination is a gold standardexamination to diagnose deaths from drowning. However, thisexamination is still controversial because diatoms cannot alwaysbe found on the examination of the lung. This can occur in atypicaldrowning cases such as dry drowning, disruptive climatic factors,procedures and use of chemicals that are destructive and diatomdestruction and can also be caused by pollution of sea water orfresh water. 23.24A comparison between diatoms found in the victim's bodyand those in the waters where the victim was found is useful tostrengthen the diagnosis and location of the victim's death. Thediscovery of diatoms in tissue examination is one of the markersthat the victim died from drowning.1Diatom's Relationship with DrowningDiatom checks on suspected victims of drowning areroutine procedures that must be performed. Diatoms are used 9377diagnostic tools to investigate drowning cases. Because of this, thediatom examination aims: ascertain whether a person died due todrowning or not, find out whether the person is still alive whendrowning and know the location of the sinking body before dying.29III. RESEARCH METHODSResearch Types and DesignThe type of research conducted descriptively is todetermine the type of diatoms in rivers in the city of Tebing TinggiLocation and Time of ResearchThe study was conducted in the Padang river and theBahilang river in the city of Tebing Tinggi,When the study was conducted from August to November2019. Sampling was carried out at 09.00-11.00 WIB, becausesunlight penetration for the process of photosynthesis of diatomswas considered optimal at that hour.Sample and How it Works ResearchThe material used in this study is river water taken at 2rivers in Tebing Tinggi City in different locations, namely in theupstream, middle and downstream areas at a depth of 1 meter to 2meters from the surface of the river.Take water from the river with a plankton net (planktonnet), then the netted plankton samples will be collected in a bucketwhich is then poured into as many as 20 ml bottles, enter as muchas 20 ml concentrated H2SO4 and leave for 24 hours. Heat withlow heat until boiling, then pour into it a few drops of concentratedHN03, until the color is clear yellow. The liquid is centrifuged for15 minutes at 3000 rpm. The sediment (sediment) is washed withdistilled water and then again the sediment (sediment) is seenunder a microscope with a magnification of 100 times. Check theshape of the diatoms found, then identify.IV. RESEARCH RESULTTable 1. Distribution of Types of Diatoms in the PadangRiver at the Upstream, Middle and Downstream Stations inTebing Tinggi City.NO1234567Types ofDiatomsNavicula sp.Synedra sp.Caloneis sp.Nitzschia sp.Cymbella sp.Fragillaria sp.Cyclotella sp.StationsUpstreamMiddleDownstream - - - - www.ijsrp.org

namely Sungai Padang and Sungai Bahilang . Results : . or rectangular cross-section, while the Pennales Order is longitudinal or sigmoid shaped like the letter "S". Along with the median diatom cell fatigue there is a middle lane called rafe (raphe) .17,18 Diatom classification according to their lifestyle is also .

Application of two methods for determining diet of .

Types of Socialization and Their Importance in .

Variations in Cloud Cover and Cloud Types over the Ocean .

Types of Aggression, Responsiveness to Provocation, and .