THE DAO OF THE 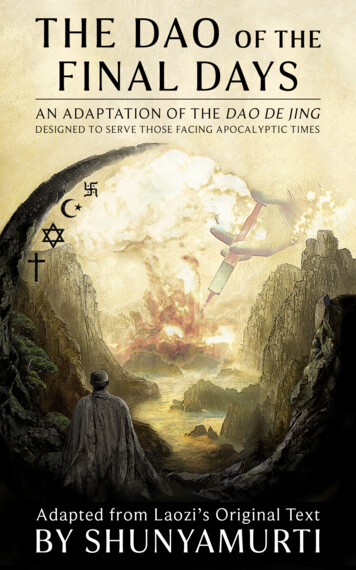 I NTRODUCTIONThe Dao De Jing—The Book of the Way and ItsVirtue—is a timeless masterpiece of wisdom. Butto serve the souls of these last days before the finalcollapse of planetary civilization, the profoundwisdom of Laozi required an update to be properlyunderstood and assimilated by postmodern minds.Only small changes were required to orient theprinciples of Truth to apply to our current situation.Laozi’s greatness in channeling the Way is that itmakes clear even now, thousands of years later, theway to channel Dao anew. It is our responsibility toferment the old wine and re-bottle it for therefreshment of all who are on the hero’s journey.Keep in mind as you read, that for the ancientsages, the concept of Virtue also meant real power.Those who are attuned to the Way not onlyincrease their serenity and intelligence, butsimultaneously their compassionate goodness andtheir power to endure, uplift, and creatively effectbenevolent change. Our hope is to transmit withoutflaws the great sage Laozi’s deep understanding ofthe immortals’ path and apply those principles tothe task of commanding the forces in the matrix1

now in play.Although the word Dao can generally be translatedas Way, in this adaptation it is most often being leftin its original Chinese form. This is because thiscentral term also has other significations andimplications that cannot all be combined in a singleword. Dao refers to the vibrational frequency ofthe Supreme Intelligence manifesting as theUniverse. Dao also refers to the paradoxicalstrategies and tactics that a sage will apply inparticular situations of difficulty. Dao can furtherrefer to the state of consciousness of the illuminedsage, including the realization of absolutenonduality, the interconnectedness of every being,every seemingly separate thing, and every event inthis holographic simulation. In that sense, Dao isequivalent to the Vedic term for Ultimate Reality,Brahman. That makes it equally equivalent to thelater Mahayana concept of Buddha Nature. And ofcourse, Dao can also be considered the Will of God.The word Dao derives from the Sanskrit termDharma, the core concept of the ancient yogis ofthe lost era of Bharata that signifies both theaccurate way to act in the world in order toproduce the optimal karmic outcome, as well as theattainment of Infinite Mind. Dao can also signifythe power of a sage to employ the mind in2

supernormal modes in accord with the SupremeWill. The Sanskrit term for this power is siddhi*,and one who has mastered that level ofconsciousness is a siddha.To abide in the Dao means to live in the highestlevel of consciousness, in resonance with theSource of universal Being. In that sense, the Dao isequivalent to Atman, the yogic term for the RealSelf. This is also known as our true nature, ouressence, which is formless and therefore capable ofshapeshifting on the phenomenal plane. TheKashmir Shaivite sages of India referred to thisultimate Real as Chaitanya, and its creative poweras Spanda.The understanding of the Dao was elaborated in aunique and original way by Laozi, which wasdeveloped further by the contemporary sageZhuangzi, whose ideas are also incorporated in thisadaptation. But we can perceive the same wisdomin the innermost teachings of all the great spiritualtraditions of the world. Abraham, Moses, and theearly prophets of Israel, especially the Essenes and*All italicized Sanskrit, Chinese, and Latin terms are deﬁnedin the glossary that follows the text, unless they are deﬁnedin the text itself.3

Enochians, were attuning to the Dao. The Dao wasclearly taught by Jesus Christ, although the Churchlater banned and burned most of the authenticgospels. The Dao can be recognized in the HolyQuran and many Sufi texts. Numerous sages inrecent world history have manifested the Dao. Buttoday, in these dark times of dumbed-downmaterialistic culture and corrupted religiouslineages, the Dao is nearly extinct. But since theDao is our nature, it cannot really be lost. We havethe capacity to attune to the Dao if we are willingto train our minds to sustain perfect stillness, purifyour hearts to a state of unconditional love,empathy, courage, nobility, and joy, and surrenderour wills and all personal desire to the SupremePresence.If we attempt to understand the cosmos from theperspective of the ego, using differentiatinganalytic logic, it will appear infinitely complex andindeterminate. But from the level of the SupremeIntelligence, the universe is absolutely simple andimmediate. This is because at the level at which theDao functions, the world is not other than the OneSelf. Moreover, at the highest level ofconsciousness, both space and time are recognizedas illusory. The entire implicate order of cosmicevolution is here now, to those who have the Eyeof Dao with which to see. This is also famously4

known by such terms as the Eye of Ra by theancient Egyptian sages, and the Eye of Shiva byIndian yogis, or simply as the Third Eye. To attainthe Dao, we must open our Third Eye.To open the Third Eye, however, we must attune tothe Dao. This can seem to be the ultimate catch22, an impossibility to attain. But if we look deeper,without the burden of ordinary logic, and recognizethat the Dao is always already present as our truenature, then we can understand that our Third Eyeis open even now, and we must simply start lookingthrough it, rather than only focusing through thetwo worldly eyes that see only illusions,projections, impermanent appearances, and cannotperceive that all these are governed by a higherpower.Simply attune to the Dao and you will be guidedsafely through this time of tribulations. The onlycaveat is that you must be willing and able to dropyour preconceptions, your current belief systems,and your conventional ideas of good and evil. Youmust understand and palpably feel that death is notthe end, that there is nothing to fear, and that allbeings die, but only on the physical level. All planetsalso die. The universe itself undergoes birth anddeath.5

Once we recognize that we are at the point ofplanetary death—and even cosmic obliteration—and we have refined our intellects to the realizationof eternity, we will feel what a blessing this is forour simulated world of suffering beings. We canalso then navigate calmly through the currentmoment of barely disguised global genocide viabioweaponry and other high-tech means ofdestruction and enslavement of the human race.But what is of essential importance is that weshould not judge this event through the eyes ofconventional morality and fall into rage or despair.That is the great trap that we must avoid.By attuning to the Dao, we can then see this wholepanorama with the Eye of Shiva, the ultimatedestroyer of worlds, who acts when those worldshave become evil. This world of cruel andoppressive dictators will come to an end, and soon,by virtue of the Dao. The Will of Shiva is absolutelybenevolent, and this world will be painlessly suckedinto the Singularity—an infinitesimal and infinitelydense point of infinite power, intelligence, andawareness. This point of eternal light is equivalentto the theistic concept of the Godhead, or SupremeSelf. This point of absolute power can be palpatedby the inwardly directed attention at any moment,and is the basis of what yogis call samadhi. To bein sahaja samadhi, the yogic term for perpetual6

abidance in the Supreme Reality, is to be attunedto the Dao.Once one accepts that the current episode ofseemingly unprecedented malignant murder of alllife on our planet is a natural cyclic occurrence,inevitable and necessary, and in accordance withGod’s will, we can relax our resistance and focuson the higher meaning and implications of thisevent. First, we can recognize that all that ishappening is symptomatic of the terminal illness ofNature on planet Earth, and that this was causedby the fall of humanity into demonic depravity,having had our souls captured and usurped by thethought-form we call the ego.T HIS IS AN EXCERPT FROM THE I NTRODUCTION .TO READ THE FULL VERSION , PLEASE VISIT OURONLINE STORE AND PURCHASET HE DAO OF THE F INAL DAYS .7

TOPURCHASE YOUR COPY OF THE BOOK ,PLEASE CLICK HERE