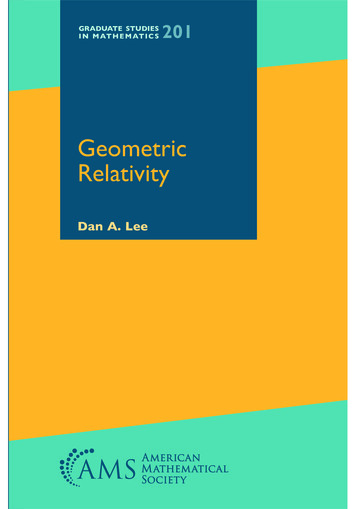 For my parents, Rupert and Gloria Lee

PrefaceThe mathematical study of general relativity is a large and active ﬁeld.This book is an attempt to introduce students to just one part of this ﬁeld.Speciﬁcally, as the title suggests, this book deals primarily with problemsin general relativity that are essentially geometric in character, meaningthat they can be attacked using the methods of Riemannian geometry andpartial diﬀerential equations. However, since there are still so many topicsthat match this description, we have chosen to further narrow the focus ofthis book to the following concept. This book is primarily about the positivemass theorem and the various ideas that surround it and have grown fromit. It is about understanding the interplay between mass, scalar curvature,minimal surfaces, and related concepts.Many geometric problems in general relativity specialize to problemsin pure Riemannian geometry. The most famous of these is the positivemass theorem, ﬁrst proved by Richard Schoen and Shing-Tung Yau in 1979[SY79c, SY81a], and later by Edward Witten using an unrelated method[Wit81]. Around two decades later, Gerhard Huisken and Tom Ilmanen proved a generalization of the positive mass theorem called the Penrose inequality [HI01], which was later proved using a diﬀerent approachby Hubert Bray [Bra01]. The goal of this book is to explain the background context and proofs of all of these theorems, while introducing various related concepts along the way. Unfortunately, there are many topicsand results that would ﬁt together nicely with the material in this book,and an argument could certainly be made that they belong in this book,but for one reason or another, we had to leave them out. At the top ofthe wish list for topics we would have liked to include are: a thoroughdiscussion of the Jang equation as in [SY81b, Eic13, Eic09, AM09], aix

xPrefacecomplete proof of the rigidity of the spacetime positive mass theorem asin [BC96, HL17] (see Section 8.2), compactly supported scalar curvaturedeformations as in [Cor00, CS06, Cor17] (see Theorems 3.51 and 6.14),and a tour of constant mean curvature foliations and their relationship tocenter of mass [HY96, QT07, Hua09, EM13].The main prerequisite for this book is a working understanding ofRiemannian geometry (from books such as [Cha06, dC92, Jos11, Lee97,Pet16, Spi79]) and basic knowledge of elliptic linear partial diﬀerentialequations, especially Sobolev spaces (various parts of [Eva10,GT01,Jos13]).Certain facts from partial diﬀerential equations are recalled in the Appendix,with special attention given to the topics which are the least “standard”—most notably the theory of weighted spaces on asymptotically ﬂat manifolds.A modest amount of knowledge of algebraic topology is assumed (at the levelof a typical one-year graduate course such as [Hat02, Bre97]) and will typically only be used on a superﬁcial level. No knowledge of physics at all isrequired. In fact, the book has been structured in such a way that Part 1contains almost no physics. Although the Riemannian positive mass theorem was originally motivated by physical considerations, it is the author’sconviction that it eventually would have been discovered for purely mathematical reasons. Part 2 includes a short crash course in general relativity,but again, only the most shallow understanding of physics is involved.Despite the level of prerequisites, this book is still, unfortunately, notself-contained. We will typically skip arguments that rely on a large bodyof specialized knowledge (e.g., geometric measure theory). More generally,there are many places in the book where we only give sketches of proofs.This is sometimes because the results draw upon a wide variety of facts ingeometric analysis, and it is not realistic to include all relevant backgroundmaterial. In other cases, it is because our goal is less to give a completeproof than to give the reader a guide for how to understand those proofs.For example, we avoid the most technical details in the two proofs of thePenrose inequality in Chapter 4, partly because the author has little to oﬀerin terms of improved exposition of those details. The interested reader canand should consult the original papers [HI01, Bra01, BL09]. Since thisbook is intended to be an introduction to a ﬁeld of active research, we arenot shy about presenting statements of some theorems without any proof atall. We hope that this will help the reader to understand the current stateof what is known and oﬀer directions for further study and research.In order to simplify the discussion, most deﬁnitions and theorems willbe stated for manifolds, metrics, functions, vector ﬁelds, etc., which aresmooth. Except where explicitly stated otherwise, the reader should assumethat everything is smooth. (Despite this, because of the use of elliptic theory,

Prefacexiwe will of course still need to use Sobolev spaces for our proofs.) The reasonfor this is to prevent having to discuss what the optimal regularity is for thehypotheses of each theorem. The reader will have to refer to the researchliterature if interested in more precise statements.When we refer to concepts or ideas that are especially common or wellknown, instead of citing a textbook, we will sometimes cite Wikipedia. Thereasoning is that in today’s world, although Wikipedia is rarely the bestsource, it is often the fastest source. Here, the reader can get a quick introduction (or refresher) on the concept and then seek a more traditional mathematical text as desired. These citations will be marked with the name ofthe relevant article. For example, the citation [Wik, Riemannian geometry]means that the reader should visithttp://en.wikipedia.org/wiki/Riemannian geometry.There are many exercises sprinkled throughout the text. Some of themare routine computations of facts and formulas that are used heavily throughout the text. Others serve as simple “reality checks” to make sure the readerunderstands statements of deﬁnitions or theorems on a basic level. Finally,there are some exercises (and “check this” statements) that ask the readerto ﬁll in the details of some proof—these are meant to mimic the sort ofroutine computations that tend to come up in research.The motivation for writing this book came from the fact that, to theauthor’s knowledge, there is no graduate-level text that gives a full accountof the positive mass theorem and related theorems. This presents an unnecessarily high barrier to entry into the ﬁeld, despite the fact that the corematerial in this book is now quite well understood by the research community. A fair amount of the material in Part 1 was presented as a seriesof lectures during the Fall of 2015 as part of the General Relativity andGeometric Analysis seminar at Columbia University.I would like to thank Hubert Bray, who is the person most responsible forshepherding me into this ﬁeld of research. He taught me much of what I knowabout the subject matter of this book and strongly shaped my intuition andperspective. He also encouraged me to write this book and came up with thetitle. I thank Richard Schoen, my doctoral advisor, for teaching me aboutgeometric analysis and supporting my research in geometric relativity. I havealso learned a great deal about this subject from him through many privateconversations, unpublished lecture notes, and talks I have attended over theyears. Similarly, I thank my other collaborators in the ﬁeld, who have taughtme so much throughout my career: André Neves, Jeﬀrey Jauregui, ChristinaSormani, Michael Eichmair, Philippe LeFloch, and especially Lan-HsuanHuang, who kindly discussed certain technical issues related to this book.

xiiPrefaceI also thank Mu-Tao Wang for inviting me to give lectures at Columbiaon the positive mass theorem at the very beginning of this project, andGreg Galloway for explaining to me various things that made their wayinto the introduction to general relativity in Part 2. Indeed, the expositionthere owes a great deal to his excellent lecture notes [Gal14]. I thankPengzi Miao for some helpful conversations while writing this book, as wellas the anonymous reviewers who oﬀered constructive feedback on an earlierdraft. As an undergraduate, I wrote my senior thesis on Witten’s proof ofthe positive mass theorem under the direction of Peter Kronheimer, and insome sense this book might be thought of as the culmination of that project,which began nearly two decades ago.

Notation and review of Riemannian geometry 3 . The mathematical study of general relativity is a large and active ﬁeld. . [Ago13] IanAgol,The virtual Haken conjecture,Doc.Math.18 (2013),1045–1087.With

How to: use Relativity’s Document Viewer Mode