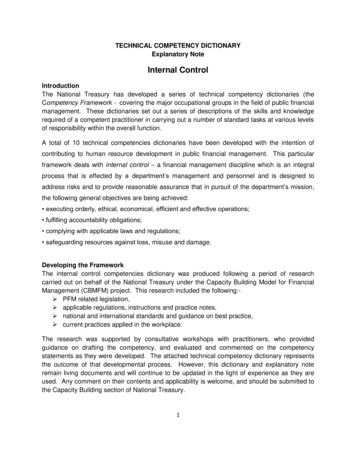 TECHNICAL COMPETENCY DICTIONARYExplanatory NoteInternal ControlIntroductionThe National Treasury has developed a series of technical competency dictionaries (theCompetency Framework - covering the major occupational groups in the field of public financialmanagement. These dictionaries set out a series of descriptions of the skills and knowledgerequired of a competent practitioner in carrying out a number of standard tasks at various levelsof responsibility within the overall function.A total of 10 technical competencies dictionaries have been developed with the intention ofcontributing to human resource development in public financial management. This particularframework deals with internal control – a financial management discipline which is an integralprocess that is effected by a department’s management and personnel and is designed toaddress risks and to provide reasonable assurance that in pursuit of the department’s mission,the following general objectives are being achieved: executing orderly, ethical, economical, efficient and effective operations; fulfilling accountability obligations; complying with applicable laws and regulations; safeguarding resources against loss, misuse and damage.Developing the FrameworkThe internal control competencies dictionary was produced following a period of researchcarried out on behalf of the National Treasury under the Capacity Building Model for FinancialManagement (CBMFM) project. This research included the following: PFM related legislation, applicable regulations, instructions and practice notes, national and international standards and guidance on best practice, current practices applied in the workplace.The research was supported by consultative workshops with practitioners, who providedguidance on drafting the competency, and evaluated and commented on the competencystatements as they were developed. The attached technical competency dictionary representsthe outcome of that developmental process. However, this dictionary and explanatory noteremain living documents and will continue to be updated in the light of experience as they areused. Any comment on their contents and applicability is welcome, and should be submitted tothe Capacity Building section of National Treasury.1

Definition and ScopeInternal control operates as an integral part of the financial management activities in thedepartment. As part of this role, it normally reports to the department’s Chief Financial Officer.The responsibility of internal control is to identify, mitigate and manage control risks which mayhamper achievement of the Department’s objective to effectively, efficiently and economicallymanage its financial and related resources.The main functions performed by internal control cover the following areas: Manage effective, efficient and transparent financial (internal) control / inspectoratemeasures. Manage Loss control Manage financial and financial related systems Support with the management of Fraud prevention Maintain financial information and knowledge management Maintain governance frameworks Facilitate and participate in committees, forums and oversight bodiesThis dictionary however, deals only with specific internal control and loss control issues –matters pertaining to other financial procedures such as risk management, internal auditing,financial accounting and budgeting are dealt with in other dictionaries, though a number ofcompetencies in this dictionary do address aspects of engagement with some of thesefunctions. The dictionary is based on the functioning of a typical government internal controlactivity.AssumptionsIn order to carry out its role effectively, internal control has to be able to establish and maintain adegree of independence from the other financial management activities. Although part of theorganisational structure of the Office of the Chief Financial Officer, and reporting to the CFO,internal control needs to be able to exercise independent judgement about its operations whichpermit it substantially to determine its own work programme and express control risk opinionsfree from direct intervention by line management.The dictionary has also been designed on the assumption that internal control officials workingin national and provincial departments of government are subject to broadly the same workingpractices and work with common IT and other operational systems. At the same time it isrecognised that there can be variations in detailed practice between central and provincialadministrations, and between individual provincial administrations, so the specifications havebeen carefully drafted at a level of generality that ensures that such variations have beenaccommodated.2

The Internal Control Dictionary – Knowledge and SkillsThe technical competencies dictionary takes the form of a database containing two mainelements: the knowledge (and understanding) required to carry out efficient and effective internalauditing; the skills required to carry out efficient and effective internal auditing.However, the levels of skill and knowledge required vary substantially according to the level ofresponsibility of the individual employee in the organisation. To address this, both skills andknowledge descriptions are provided at four different levels.SkillsAll descriptions of skills required are offered in four tiers (occupational roles) which broadlycorrespond with the levels of administrative & technical (operational), supervisory (tactical) andmanagerial (strategic) responsibilities. Internal control activities are likely to involve staff atoccupational role 1 level in support functions, but such staff are not normally directly involved inprofessional activity and their skill requirements are primarily generic.KnowledgeThe actual knowledge required to support any competency is the same for all four occupationalroles. However, the depth of that knowledge, and the extent of underpinning understandingrequired varies according to the responsibilities being exercised. Therefore knowledgerequirements are also specified at four levels which broadly equate with the descriptionsworking, technical, in-depth and expert.It should be noted that whilst the level of knowledge and understanding specified in thedictionary generally escalates with occupational levels, there are instances where the level ofknowledge is not the same as the occupational level i.e. a greater or lesser depth of knowledgeis required than would normally be expected in that occupational role.More comprehensive details are provided in the attached Table 1.The Internal Control Dictionary – Competency DescriptionsThe knowledge and skills are listed against the principal components of the function. Thefunction is therefore broken down into a series of competency clusters which are high-levelsegments of the function consisting of one or more sub-components. Each cluster is thenbroken down into these sub-components – competency titles – which are the level at which thedefinitions of the skills and knowledge are provided.Each definition is supplemented by acompetency description which summarises the scope of the competency defined. Table 2(attached) contains a list of the competency clusters and competency titles used in thisdictionary with an indication in each case of the occupational roles to which they relate.Because of database limitations in the dictionary, general areas of knowledge (such as primarylegislation) and other regulations and guidance, some of this knowledge has had to besummarised, so a full statement of the knowledge required under these competency titles is set3

In This Section: Schools from Georgia Alabama

Annex 1: Annotated text of the Minimum Requirements for .