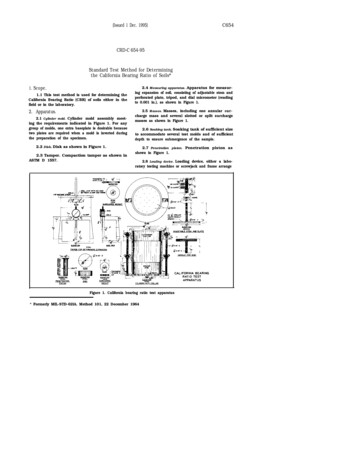 C 654(Issued 1 Dec. 1995)5-lb annular disk surcharge weight on the soil surfaceprior to seating the piston and finally applying the remainder of the weights.ment (as illustrated in Figure 2). which can be used toforce the penetration piston into the specimen at a uniform rate of 0.05 in. per minute.3.1.2 Seating piston. To seat the penetration piston, bring it into contact with the sample with sufficientpressure to cause the load dial to register a load ofbetween zero and 1 lb.3.1.3 Applying loads. Apply loads on the penetration piston so that the rate of penetration is approximately 0.05 in. per minute. Obtain load readings at0.025-. 0.050-, 0.075-, 0.100-, 0.125-, 0.150-, 0.175-,0.200-, and 0.300-in. deformation. In manually operated loading devices, it may he necessary to take loadreadings at closer intervals to control the rate of penetration.Figure 2. Laboratory CBR Test equipment3.1.4 Determining moisture content Determinethe moisture content in the upper 1 in., and in the case of2.9 General laboratory equipment. General laboratory equipment specified in CRD-C 653.2.10 Loading device. Loading device consistingof a mechanical screwjack to apply the load and aloaded truck to provide the resistance for the screwjack(see Figure 3).2.1.1 Proving rings. Calibrated proving rings.2.12 Penetration piston. Penetration piston, 1.95in. in diameter, with internally threaded pipe extensionsand connectors.2.13 Micrometers. Dial micrometers and support.2.14 Steel plate. Steel plate, 10 in. in diameter,having a 2.03-in.-diameter hole in the center and weighing 10 lb.3. Procedure.3.1 Penetration test procedure. The followingpenetration test procedure applies to laboratory andfield in-place CBR tests. Satisfactory forms for recording penetration data for laboratory tests and field testsare shown in Figure 4 and Figures 5 and 6, respectively.3.1.1 Applying surcharge. Apply sufficient penetration surcharge on the soil being tested to produce anintensity of loading equal to the weight (within 5 lb)of the base material and pavement that overlie the soilbeing tested, but the surcharge weight shall be not lessthan 10 lb. If the sample has been soaked previously,the penetration surcharge must be equal to the soakingsurcharge. To prevent upheaval of soil into the holeof the surcharge weights, it is advisable to place oneFigure 3. CBR testing equipment2

(Issued 1 Dec. 1995)C 654consolidation as a percentage of the initial specimenheight.3.2.5 Draining specimen. Wipe the free waterfrom the specimen, being careful not to disturb the surface of the specimen; then allow it to drain for 15 minutes. It may be necessary to tilt the specimen in orderto achieve good drainage.3.2.6 Weighing specimen. Remove the perforatedplate and surcharge weights and weigh the specimen.The specimen is now ready for the penetration test.3.3 General procedure for testing laboratory-compacted CBR specimens.3.3.1 Soil grouping for test purposes. For testinglaboratory-compacted specimens for the CBR methodof design, materials have been grouped into threeclasses with respect to behavior during saturation: (a)cohesionless sands and gravels, (b) cohesive soils, and(c) highly swelling soils. The first group usually includes the GW, GP, SW, and SP classifications ofASTM D 2487. The second group usually includes theGM, GC, SM, SC, ML, CL, and OL classifications.Swelling soils usually comprise the MH, CH, and OHclassification. Separate procedures are given for eachof the groups.Figure 4. CBR laboratory record formlaboratory tests determine an average moisture contentfor the entire depth of the sample.3.3.2 Cohesionless sands and gravels. Cohensionless soils usually compact readily under rollers or traffic. Specimens shall be prepared, as specified in CRDC 653 at high densities and at a range of moisture contents bracketing those anticipated in the field, includingmoisture contents as high as practicable. If soakingdoes not lower the CBR, it may be omitted for furthertests on the same material.3.2 Procedure for soaking laboratory CBR specimens.3.2.1 Placement of masses. Place the adjustablestem and plate on the surface of the sample, and applyan annular mass to produce an intensity of loading equalto within 5 lb of the mass of the base material andpavement that overlie the soil being tested, but in nocase should the surcharge mass be less than 10 lb.3.3.3 Cohesive soils.3.3.3.1 Specimen preparation and compactioncurves development. Representative samples of cohesive soils are tested in a manner to develop data thatwill show their behavior over the entire range of anticipated moisture contents. Test specimens are prepared and compaction curves are developed for the CE55, CE 26, and CE 12 compaction efforts as describedin CRD-C 653. Each specimen shall be soaked andpenetrated to develop a complete family of curvesshowing the relation between density, moisture content,and CBR. To aid in determining the validity of thecompaction data, a semilog plot of maximum densityversus compaction effort in energy per unit volume usually gives a straight-line relation as illustrated in CRD-C653.3.2.2 Placement of tripod. Set tripod on mold anddial stem on adjustable stem from plate and make initialmeasurement from which to determine swell or consolidation of specimen.3.2.3 Soaking specimen. Immerse the mold inwater to allow free access of water to top and bottom,and allow the specimen to soak for 4 days. (A shortersoaking period is permissible for soils that take upmoisture readily if tests show that a shorter period doesnot affect the results.)3.2.4 Final measurements. Make final swell orconsolidation measurements and calculate the swell or3

C 654(Issued 1 Dec. 1995)lower value, say 12. The right-hand plot in Figure 7shows that close control of moisture content withinthose limits (13 percent to 16 percent) is necessary because low CBR values will be obtained if the moisturecontent is allowed to increase appreciably above thedesired range.3.3.3.2 Obtaining design CBR data. The datafrom a CBR test are plotted as in Figure 7, and theresulting family of CBR curves represents the characteristics encompassing a wide range of field conditions.The design CBR shall be based on the density andmolding moisture content anticipated in the field. Forexample, assume that the lean clay soil, for which resuits are plotted in Figure 7, can be processed to anaverage moisture content of 13 percent to 16 percentand that it can be compacted to a density varying from110.5 (95 percent of modified maximum density) to115 Ib/ft3 (see cross-hatched area on lower left-handplot of Figure 7). If construction could be controlledso that the density and moisture content were withinthese ranges, the right-hand plot of Figure 7 indicatesthat the soils, after moisture conditions had become adjusted, would have a CBR (see cross-hatched area onright-hand lot of Figure 7) varying between about 11(1105-lb/ft 3 density and 13 percent moisture content)and 26 (1l54lb/ft3 density and 15 percent moisture content). The design CBR selected should be near the3.3.4 Swelling soils.3.3.4.1 Test procedures. The test procedures forhighly swelling soils are the same as those previouslydescribed for cohesive soils; however, the objectives ofthe testing program are not exactly the same. Testsshall be performed on soils having expansive characteristics to determine a moisture content and a densitywhich will minimize expansion. The proper moisturecontent and density are not necessarily the optimummoisture content and density for the CE 55 compactioneffort. Generally, the minimum swell and highestsoaked CBR will occur at a molding moisture contentslightly wet of optimum. When testing highly swellingFigure 7. Recommended procedure for performing CBR tests for design6

(Issued 1 Dec. 1995)soils, it may be necessary to prepare samples for a widerrange of moistures and densities than normally used toestablish the relation between moisture content, density,swell. and CBR for a given soil. A careful study ofthe test results will permit the selection of the propermoisture content and density required in the field. Itshould be noted that the possibility exists that thicknessdesign may be governed by the compaction requirements instead of the CBR in some cases.3.4 Field in-place tests (see Figures 5 and 6 fordata sheet). Field in-place CBR tests are used for design under any one of the following conditions: (a)when the in-place density and water content are suchthat the degree of saturation (percentage of voids filledwith water) is 80 percent or greater; (b) when the material is coarse grained and cohesionless so that it isnot affected by changes in water content; and (c) whenconstruction was completed several years before. Inthe last-named case, the water content does not actuallybecome constant but appears to fluctuate within rathernarrow ranges, and the field in-place test is considereda satisfactory indicator of the load-carrying capacity.The time required for the water content to become stabilized cannot be stated definitely, but the minimumtime is approximately 3 years.3.4.1 Penetration. Level the surface to be tested,and remove all loose material. Then follow the procedure described in 3.1.1.C 654nation, and (b) 4 to 6 in. away from the point of penetration for density determination.3.5 Undisturbed specimens. Because of the difficulty of obtaining reliable CBR test results on so-calledundisturbed specimens, these tests will be performedonly in special cases.Note: The past practices of obtaining and testingsamples in wooden boxes and of leaving an annularspace between sample and container wall to be filledwith plastic material such as paraffin shall be discontinued because these practices leave some doubt as tothe adequacy of the lateral confinement of specimenduring the CBR test.4. Calculations.4.1 Calculation procedures. The CBR shall becalculated immediately after completion of the test, asfollows.4.1.1 Plotting load-penetration curve. Calculatethe penetration load in lb/in.* and draw the loadpenetration curve. It is sometimes necessary to correctthe CBR value because of surface irregularities and/orthe concave-upward shape of the curve that characterizes samples on the wet side of optimum for certainsoils. Figure 8 shows both the uncorrected and theCorrection can be madecorrected CBR curves.graphically by adjusting the zero point of the curve as3.4.2 Number of tests. Three in-place CBR testsshould be performed at each elevation tested in the basecourse and at the surface of the subgrade. However,if the results of the three tests in any group do not showreasonable agreement, three additional tests should bemade at the same location. A reasonable agreementbetween three tests where the CBR is less than 10 permits a tolerance of 3; where the CBR is less than 10permits a tolerance of 3; where the CBR is from 10 to30, a tolerance of 5; and from 30 to 60, a tolerance of10. For CBR’s above 60, variations in the individualreadings are not of particular importance. For example,actual test results of 6, 8, and 9 are reasonable and canbe averaged as 8; results of 23, 18, and 20 are reasonable and can be averaged as 20. If the first three testsdo not fall within the specified tolerance, the three additional tests are made at the same location, and thenumerical average of the six tests is used as the CBRat that location.3.4.3 Moisture content and density. After completion of the CBR test, a sample shall be obtained (a) atthe point of penetration for moisture-content determi-Figure 8. Correlation of stress-penetration curve

C 654(Issued 1 Dec. 1995)unit loads at 0.1 and 0.2 in. by the standard loads of1,000 and 1,500 psi, respectively. Each ratio is multiplied by 100 to obtain the bearing ratio in percent. TheCBR is usually selected at 0.1-in. penetration. If theratio at 0.2-in. penetration is greater, the test should bererun. If check tests give similar results, use the CBRat 0.2-in. penetration.in Figure 8, or it can be made mathematically by selecting the largest CBR value based on load increasedivided by the standard loads for any consecutive 0.1or 0.2-in. penetration. The mathematical correction hasthe advantage of eliminating the personal error in drawing the corrected curve. However, the curve should bedrawn in any case so that erratic data will be moreeasily recognized.4.1.3 Design CBR value. The specific design CBRvalues from field test may be determined following procedures indicated in the appropriate flexible pavementdesign manuals.4.1.2 Calculating CBR. Determine the correctedload values at 0.1- and 0.2-in. penetration from whichthe CBR values are obtained by dividing the corrected8

3.3.3.2 Obtaining design CBR data. The data from a CBR test are plotted as in Figure 7, and the resulting family of CBR curves represents the charac-teristics encompassing a wide range of field conditions. The design CBR shall be based on the density and molding moisture content anticipated in

Correlation between the Standard Penetration Test and the .

From the Bluetooth Standard to Standard-Compliant 0-days