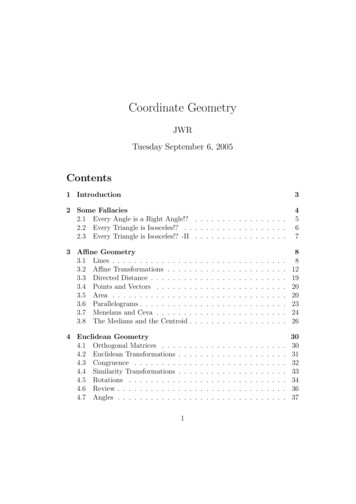 C Sets and Transformations175IntroductionThese are notes to Math 461, a course in plane geometry I sometimes teachat the University of Wisconsin. Students who take this course have completed the calculus sequence and have thus seen a certain amount of analyticgeometry. Many have taken (or take concurrently) the first course in linearalgebra. To make the course accessible to those not familiar with linear algebra, there are three appendices explaining matrix notation, determinants,and the language of sets and transformations.My object is to explain that classical plane geometry is really a subsetof algebra, i.e. every theorem in plane geometry can be formulated as atheorem which says that the solutions of one system of polynomial equationssatisfy another system of polynomial equations. The upside of this is thatthe criteria for the correctness of proofs become clearer and less reliant onpictures.The downside is evident: algebra, especially complicated but elementaryalgebra, is not nearly so beautiful and compelling as geometry. Even theweakest students can appreciate geometric arguments and prove beautifultheorems on their own. For this reason the course also includes syntheticarguments as well. I have not reproduced these here but instead refer tothe excellent texts of Isaacs [4] and Coxeter & Greitzer [3] as needed. It ismy hope that the course as a whole conveys the fact that the foundationsof geometry can be based on algebra, but that it is not always desirable toreplace traditional (synthetic) forms of argument by algebraic arguments.The following quote of a quote which I got from page 31 of [3] should serveas a warning.The following anecdote was related by E.T. Bell [1] page 48.Young Princess Elisabeth had successfully attacked a problem inelementary geometry using coordinates. As Bell states it, “Theproblem is a fine specimen of the sort that are not adapted tothe crude brute force of elementary Cartesian geometry.” Herteacher René Descartes (who invented the coordinate method)said that “he would not undertake to carry out her solution . . .in a month.”3

The reduction of geometry to algebra requires the notion of a transformation group. The transformation group supplies two essential ingredients.First it is used to define the notion of equivalence in the geometry in question.For example, in Euclidean geometry, two triangles are congruent iff there isdistance preserving transformation carrying one to the other and they aresimilar iff there is a similarity transformation carrying one to the other. Secondly, in each kind of geometry there are normal form theorems which can beused to simplify coordinate proofs. For example, in affine geometry every triangle is equivalent to the triangle whose vertices are A0 (0, 0), B0 (1, 0),C0 (0, 1) (see Theorem 3.13) and in Euclidean geometry every triangle iscongruent to the triangle whose vertices are of form A (a, 0), B (b, 0),C (0, c) (see Corollary 4.14).This semester the official text is [3]. In past semesters I have used [4] andmany of the exercises and some of the proofs in these notes have been takenfrom that source.2Some FallaciesPictures sometimes lead to erroneous reasoning, especially if they are notcarefully drawn. The three examples in this chapter illustrate this. I gotthem from [6]. See if you can find the mistakes. Usually the mistake is akind of sign error resulting from the fact that some point is drawn on thewrong side of some line.4

2.1Every Angle is a Right Angle!?DPCREAQBOFigure 1: Every Angle is a Right Angle!?Let ABCD be a square and E be a point with BC BE. We willshow that ABE is a right angle. Take R to be the midpoint of DE, Pto be the midpoint of DC, Q to be the midpoint of AB, and O to be thepoint where the lines P Q and the perpendicular bisector of DE intersect.(See Figure 2.1.) The triangles AQO and BQO are congruent since OQ isthe perpendicular bisector of AB; it follows that AO BO. The trianglesDRO and ERO are congruent since RO is the perpendicular bisector ofDE; it follows that DO EO. Now DA BE as ABCD is a squareand E is a point with BC BE. Hence the triangles OAD and OBEare congruent because the corresponding sides are equal. It follows that ABE OBE ABO OAD BAO BAD.5

2.2Every Triangle is Isosceles!?ARQOBDCFigure 2: An Isosceles Triangle!?Let ABC be a triangle; we will prove that AB AC. Let O be the pointwhere the perpendicular bisector of BC and the angle bisector at A intersect,D be the midpoint of BC, and R and Q be the feet of the perpendicularsfrom O to AB and AC respectively (see Figure 2.2.) The right trianglesODB and ODC are congruent since OD OD and DB DC. HenceOB OC. Also the right triangles AOR and AOQ are congruent since RAO QAO (AO is the angle bisector) and AOR AOQ (theangles of a triangle sum to 180 degrees) and AO is a common side. HenceOR OQ. The right triangles BOR and COQ are congruent since we haveproved OB OC and OR OQ. Hence RB QC. Now AR AQ(as AOR and AOQ are congruent) and RB QC (as BOR and COQ arecongruent) so AB AR RB AQ QC AC as claimed.6

2.3Every Triangle is Isosceles!? -IIABDHHHHDHHDHDHHDHHHHDHDDHXFigure 3: AX bisects BACCIn a triangle ABC, let X be the point at which the angle bisector of theangle at A meets the segment BC. By Exercise 2.2 below we haveXBXC .ABAC(1)Now AXB ACX CAX C 12 A since the angles of a trianglesum to 180 degrees. By the Law of Sines (Exercise 2.1 below) applied totriangle AXB we havesin 12 AXBsin BAX ABsin AXBsin( C 12 A)(2)Similarly AXC ABX BAX B 12 A sosin 21 AXC .ACsin( B 12 A)(3)From (1-3) we get sin( C 12 A) sin( B 21 A) so C 12 A B 1 A so C B so AB AC so ABC is isosceles.2Exercise 2.1. The law of sines asserts that for any triangle ABC we havesin Bsin Csin A BCCAABProve this by computing the area of ABC in three ways. Does the argumentwork for an obtuse triangle? What is the sign of the sine?Exercise 2.2. Prove (1). Hint: Compute the ratio of the area of ABX tothe area of ACX in two different ways.7

33.1Affine GeometryLines3.1. Throughout R denotes the set of real numbers and R2 denotes the set ofpairs of real numbers. Thus a point of P R2 is an ordered pair P (x, y)of real numbers.Definition 3.2. A line in R2 is a set of form {(x, y) R2 : ax by c 0}where a, b, c R and either a 6 0 or b 6 0 (or both). Three or more pointsare called collinear iff there is a line which contains them all. Three ormore lines are called concurrent iff they have a common point. Two linesare said to be parallel iff they do not intersect.3.3. The two most fundamental axioms of plane geometry areAxiom (1) Two (distinct nonparallel) lines intersect in a (unique) point.Axiom (2) Two (distinct) points determine a line.Axiom (1) says that two equationsa1 x b1 y c1 0,a 2 x b2 y c2 0for lines have a unique common solution (the usual case), no common solution(this means that the lines are parallel), or else define the same line (which iscase if and only if the equations are nonzero multiples of one another). Thelatter two cases are characterized by the condition a1 b2 a2 b1 0 and in thefirst case the intersection point isx c1 b2 c2 b1,a1 b2 a2 b1y a 1 c2 a 2 c1.a1 b2 a2 b1Axiom (2) says that for any two distinct points P1 (x1 , y1 ) and P2 (x2 , y2 )there is a unique line {(x, y) : ax by c 0}containing both. Remark 3.5 below gives a formula for this line.8

shows that any point P of form P tP1 (1 t)P0 lies on the line. Converselyin P lies on the line, choose t to satisfy one of the two parametric equationsand then the equation for the line in the form ax by c 0 shows that theother parametric equation holds as well.Definition 3.7. The line segment connecting points P0 and P1 is the set[P0 , P1 ] {tP1 (1 t)P0 : 0 t 1}.We say that a point P on the line joining P0 and P1 lies between P0 and P1iff it lies in the segment [P0 , P1 ]. We call P0 and P1 the end points of theline segment. The ray emanating from P0 in the direction of P1 is the set{tP1 (1 t)P0 : t 0}. We call P0 the initial point of the ray.Definition 3.8. (Some general terminology.) An ordered sequence(P1 , P2 , . . . , Pn )of n distinct points no three of which are collinear is called a polygon or ann-gon. The points are called the vertices of the polygon. Two consecutivevertices in the list are said to be adjacent and also the vertices Pn and P1 areadjacent. The lines and line segments joining adjacent vertices are called thesides of the polygon and the other lines and line segments joining verticesare called diagonals. The term extended side is employed if we want toemphasize that the line and not the line segment is intended. for emphasis.but the adjective is often omitted. A 3-gon is also called a triangle, a 4-gonis also called a quadrangle, a 5-gon is also called a pentagon, a 6-gon isalso called a hexagon, etc. For triangles the two notations (A, B, C) and4ABC are synonymous; the latter is more common.3.2Affine TransformationsDefinition 3.9. A transformation T : R2 R2 is called affine iff it has theformx0 ax by p(x0 , y 0 ) T (x, y) 0.y cx dy qwhere ad bc 6 0.12

8 Klein's view of geometry 70 . 1 Introduction These are notes to Math 461, a course in plane geometry I sometimes teach at the University of Wisconsin. Students who take this course have com-pleted the calculus sequence and have thus seen a certain amount of analytic geometry. Many have taken (or take concurrently) the rst course in linear