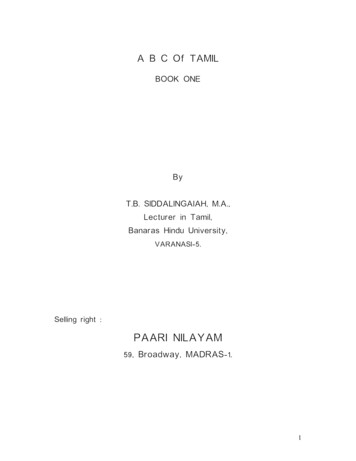 Dr. M. Varadarajan, M.A., M.O.L., Ph.D.,Professor and Head,Department of Tamil,University of Madras.FOREWORDTamil is one of the most ancient languages of the munication. It belongs to the Dravidian family of South Indiaand has a hoary literary tradition 2000 years old. It is found to bea useful vehicle of modern thought as well. There are manywriters even now enriching the language through their poetry andfiction as well as book of knowledge.It is quite natural that many non-Tamils now desire to learnthe language but good guide books written in a practical anduseful method are not found. Thiru T.B. Siddalingaiah, a wellknown and erudite scholar, has brought out this book ‘ABC ofTamil’ and fulfilled a long-felt need. While writing this he had inview the grammatical peculiarities of the language as well as thedifficulties in pronunciation and syntax experienced by the nonTamil students in learning it. His experience in teaching Tamil inDelhi, Calcutta, Varanasi and other centres has enabled him tounderstand their problems and to present every step in a clearand simple manner. Obviously he is not in favour of teaching thespoken dialects alone without any heed to the standard language3

or the written language. I, too, have found that method lessuseful. Many non-Tamils who learned only the spoken form findthemselves unable to read or write a few sentences in thelanguage and when they cease to have any contact with thepeople of the language forget it altogether.The object of this book is to assist non-Tamils in India andelsewhere at the beginning of their study of the Tamil language.Therefore, the system of the language has been explained hereas far as it is essential for the beginners. The examples andillustrations given are quite apt and adequate, simple and direct.It is my earnest hope that the two more books promised bythe author will be brought our early. By completing this project hewill be one of those men of learning who render valuable serviceto humanity by bringing minds together.M. Varadarajan4

PREFACEThe Indians, after the advent of Independence, are moreconscious, than before, of their values and traditions. The interestamong our people to know more about ourselves--our languages,literature, culture, customs and manners, habits and beliefs etc., gration, and finally help our country emerge as a great andintegrated nation.As a beginning one section of the Indians is trying to learnthe language of another part of the country and through it theliterature and the contribution of that language group to the Indianculture.The Government also have taken steps to encourage this.The Uttar Pradesh Government have started classes for teachingSouth Indian Languages to the North Indians. This book is ahumble, earnest attempt to participate in this great movement.This is not a Text Book. This is a ‘guide’ to know therudiments of the Tamil Language. This is not meant to be a ‘selftaught’. One has to take the guidance and help, now and then,from somebody whose mother-tongue is Tamil.There is a wide gulf between the written (standard) Tamiland the spoken language. It will be a futile attempt to teach thespoken language, through a book, to the people of differenttongue. The spoken language varies from place to place, is5

spoken differently by different castes, with varying intonations,and employs a different diction according to the region and thepeople who speak. So I have tried to give in this book only thestandard, written Tamil.I have been teaching Tamil to Non-Tamils since about adecade and a half. I had employed various methods in myattempt to teach this language. Finally, I found, this method, whichhas been adopted in this book, was more successful than therest. Two more books, besides this, will be published to completethis series.I take this opportunity to thank and pay my humble respectsto my professor, Dr. M. Varadarajan, Professor and the Head ofthe Department of Tamil, Madras University, for having kindlygone through the manuscript, putting in valuable suggestions andwriting an instructive foreword. I am indebted to my godfather,Mr. G.V. Pillai, whose suggestions have improved the text of thebook.I thank my esteemed friend, Prof. K.N. Srivastava, Principal,Queen’s College, Varanasi, who was a source of strength andencouragement all along.MyheartythanksaredueVenkatapati, Mr. Tambi SrinivasantomyfriendsMr.S.P.and Mr. C. Balasubramaniam,M.A., M.Litt., without whose help this book would not have seenthe light of the day.6

ran Press, Madras, for completing the work in recordtime.VaranasiSiddalingaiahFeb., 1968.7

INTRODUCTIONFour main language are current in South India. They areTamil, Telugu, Kannada and Malayalam. Theses are called theDravidian Languages. There are other languages, too, whichbelong to this family, but they are not so much developed asthese four. Hence these are important.Telugu, Kannada and Malayalam languages have borrowedfrom Sanskrit, the sounds and words. But Tamil has tried and hassucceeded in its attempt to remain almost unaffected by theinfluence of that great language, Sanskrit. As such Tamil isconsidered to be the most difficult of the Dravidian Languages tolearn. It cannot be denied that Tamil also has borrowed wordsfrom Sanskrit. But the percentage of words borrowed, comparedto the other languages of the same family, is very much less.And many of the borrowed words also have assumed a newform (Tat bhava) according to the genius of Tamil.9

‘ä’ is a combination of two sounds. ie., Ü and Þ, and ispronounced as ‘Üò ’. As such many people employ ‘Üò ’ in placeof “ä”. eg., äòó î ôõó Master - Üò òó .Practise with pronunciation: :I) Translate into English. (1() âù «õ ô (2) å¼ Ì ù (3) àù î ô, (4) ï ñ ô.II) Translate into Tamil: (1) Two horses. (2) An elephant (3) Fivechildren (4) A big rock (5) This mountain. (6) Which net? (7) Abanana leaf.LESSON TWELVE: CONJUNCTIONConjunction combines two words or sentences. Now weshall take up the conjunction ‘and’, The Tamil equivalent of this is“àñ ”. This “àñ ” is added to the words at the end.In English ‘and’ is placed in between two words which are tobe combined. e.g., Rama and Krishna. In Tamil ‘àñ ’ is added toboth the words.If there are more than two nouns (words) to be puttogether ‘and’ is placed before the last word. In Tamil ‘àñ ’ is tobe added to every word.28

Words:«ó ü - roja- a rose«ó ü ð Ì - rojappu - a rose flowerðþ - pakshi- a birdúó ð ðñ - sarppam - a snake¹û ðñ - pushpam - a flowerõ ûñ - visham- poisoný óñ - hāram- a garlandNotes: It is to be noted that these letters are formed out of theTamil characters and only their pronuncitaion is Sanskritic. ‘ü’ isformed after ‘ä’, ‘û’ is ‘à’ with a hook above. ‘ú’ is only ‘ô’with a line just after the first upward curve (ô-ô ú). ‘ý’ is acombination of ‘à’ and ‘ø’, ‘þ’ is ‘Ã’ (Kū) with a hook.These letters are employed only when a word of non-Tamilorigin is to be written.This is an improvisation to accomadate a new phone(sound), with the help of the characters available. This type ofattempt to improvise continues even now. In Tamil there is no “f”sound, nor a symbol to represent it, for there was no need for it.The present age has brought inmany terms with this phone “f”.So the Tamil scholars have formed a new character to indicatethat sound. That is ‘çð ’. This was done with the Tamil charactersonly. That is “çð”. This is an improvisation and not a deliberateintroduction of a foreign language. This has come to stay in spiteof the traditional gramma

This book is a humble, earnest attempt to participate in this great movement. This is not a Text Book. This is a 'guide' to know the rudiments of the Tamil Language. This is not meant to be a 'self-taught'. One has to take the guidance and help, now and then, from somebody whose mother-tongue is Tamil.

Identification of source (s) of pollution (high TDS) in .