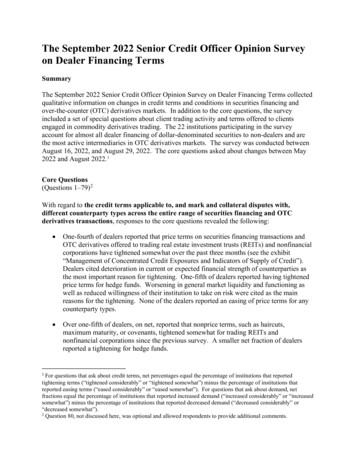 The September 2022 Senior Credit Officer Opinion Surveyon Dealer Financing TermsSummaryThe September 2022 Senior Credit Officer Opinion Survey on Dealer Financing Terms collectedqualitative information on changes in credit terms and conditions in securities financing andover-the-counter (OTC) derivatives markets. In addition to the core questions, the surveyincluded a set of special questions about client trading activity and terms offered to clientsengaged in commodity derivatives trading. The 22 institutions participating in the surveyaccount for almost all dealer financing of dollar-denominated securities to non-dealers and arethe most active intermediaries in OTC derivatives markets. The survey was conducted betweenAugust 16, 2022, and August 29, 2022. The core questions asked about changes between May2022 and August 2022. 1Core Questions(Questions 1–79) 2With regard to the credit terms applicable to, and mark and collateral disputes with,different counterparty types across the entire range of securities financing and OTCderivatives transactions, responses to the core questions revealed the following: One-fourth of dealers reported that price terms on securities financing transactions andOTC derivatives offered to trading real estate investment trusts (REITs) and nonfinancialcorporations have tightened somewhat over the past three months (see the exhibit“Management of Concentrated Credit Exposures and Indicators of Supply of Credit”).Dealers cited deterioration in current or expected financial strength of counterparties asthe most important reason for tightening. One-fifth of dealers reported having tightenedprice terms for hedge funds. Worsening in general market liquidity and functioning aswell as reduced willingness of their institution to take on risk were cited as the mainreasons for the tightening. None of the dealers reported an easing of price terms for anycounterparty types. Over one-fifth of dealers, on net, reported that nonprice terms, such as haircuts,maximum maturity, or covenants, tightened somewhat for trading REITs andnonfinancial corporations since the previous survey. A smaller net fraction of dealersreported a tightening for hedge funds.For questions that ask about credit terms, net percentages equal the percentage of institutions that reportedtightening terms (“tightened considerably” or “tightened somewhat”) minus the percentage of institutions thatreported easing terms (“eased considerably” or “eased somewhat”). For questions that ask about demand, netfractions equal the percentage of institutions that reported increased demand (“increased considerably” or “increasedsomewhat”) minus the percentage of institutions that reported decreased demand (“decreased considerably” or“decreased somewhat”).2Question 80, not discussed here, was optional and allowed respondents to provide additional comments.1

With respect to clients’ use of financial leverage, a net fraction of one-fifth of dealers indicateddecreased use of leverage by hedge funds, continuing a trend of decreasing hedge fund leverageobserved in several recent surveys (see the exhibit “Use of Financial Leverage”). Meanwhile,respondents noted that the use of leverage by other client types was basically unchanged.With regard to OTC derivatives markets, responses to the core questions revealed thefollowing: One-fifth of dealers reported that initial margin requirements for average clientsincreased somewhat over the past three months for commodity derivatives and totalreturn swaps referencing nonsecurities, and a smaller fraction of dealers reported suchincreases for foreign exchange derivatives. Initial margin requirements were reported tobe mostly unchanged for other types of OTC derivatives. One-fifth of dealers reported an increase in the duration and persistence of mark andcollateral disputes relating to OTC equity derivatives. The volume, duration, andpersistence of mark and collateral disputes relating to other types of OTC derivativesremained unchanged on net.With respect to securities financing transactions, respondents indicated the following: Net fractions of two-fifths, one-third, and one-fifth of dealers reported a tightening offunding terms with respect to collateral spreads, haircuts, and maximum maturity,respectively, for average clients in non-agency residential mortgage-backed securities(RMBS). One-third of dealers, on net, reported a tightening with respect to haircuts andcollateral spreads for consumer asset-backed securities. Small net fractions of dealers reported a tightening of funding terms across alldimensions for agency RMBS and commercial mortgage-backed securities (CMBS).One-fifth of respondents, on net, reported a tightening of collateral spreads for CMBS.One-fourth of respondents indicated that collateral spreads for financing high-yield bondshave tightened. Demand for funding was largely unchanged for all asset classes (see the exhibit“Measures of Demand for Funding and Market Functioning”). A net fraction of one-fifth of dealers indicated that liquidity and market functioning fornon-agency RMBS and CMBS deteriorated over the past three months. 3Note that survey respondents were instructed to report changes in liquidity and functioning in the market for theunderlying collateral to be funded through repurchase agreements and similar secured financing transactions, notchanges in the funding markets themselves. This question was not asked with respect to equity markets in the corequestions.3

reported an increase in the uncleared share of commodity derivatives transactions bynonfinancial clients.This document was prepared by Yesol Huh, Division of Research and Statistics, Board ofGovernors of the Federal Reserve System. Assistance in developing and administering thesurvey was provided by staff members in the Capital Markets Function, the Statistics Function,and the Markets Group at the Federal Reserve Bank of New York.

NCHRP Report 456 - Guidebook for Assessing the Social and .

Secrets of the Credit Score - University of Colorado

Credit – Lesson – What is Credit? - Hands on Banking