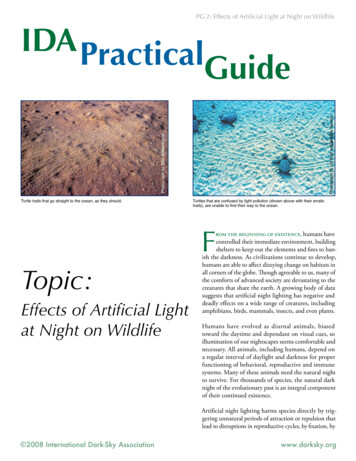 !"# %#&''()* tion, or by interfering with feeding and sustenance.Light pollution has been shown to disorient migratory birdsand hatchling turtles, disrupt mating and reproductivebehavior in fireflies and frogs, and interfere with communication in species from glowworms to coyotes. Disruptions suchas degradation of habitat, creation of artificial and dangeroushabitat, and energy waste that may lead to climate change canall be linked to excessive artificial night lighting. Researchbiologists are warning that the negative synergy of suchcombinations can result in a cascade effect, with disastrousresults for entire ecosystems around the world.Diurnal— active during daylightPhotoperiod—duration of sunlight as determined byseason (photoperiodic—internal clock governedby how long the day is)Phototaxis—movement in response to lightPredation—predatory behavior in animal relationshipsClimate characteristics vary from one year to the next; it is not uncommonto experience cool summers, dry springs, and slow falls. A season’sphotoperiod is the only consistent factor in the natural environment.Therefore, many species of plants and animals rely on the length of theday to indicate the proper season for mating, molting, and other lifecycle activities. This photoperiodic sensitivity is often so acute that manyspecies can detect discrepancies in natural light as short as one minute.Reproduction cycles are most often disrupted when artificial light at nightinterferes with species’ natural detection systems. Trees have been knownto bud prematurely; some flowers cease blooming. Artificial light also cancause animals such as squirrels and robins to mate out of season. Changesin plant and animal reproductive activity can create difficulty in findingfood and increase chances of starvation.!"# #%&'(")* ) -0?0.)!'90There is evidence that the use of high and low pressure sodium light in ecologically sensitive areassuch as wetlands, woods, and coastal areas has lessimpact on habitat and life cycle behavior than use ofother kinds of light. The relatively monochromaticwavelength emitted by the yellow tinted sodiumvapor lights attracts fewer insects and can be moreeasily filtered to minimize negative effects.8,&*4!&)#"*)#!!"#4!*0)!.)!1*)21 !*)% 71!).9):.0% 71!&5!"# #%&'(")* )23)4.5")'16)/.-6-.70)30&8.90!!.10),'&&015) &00)7&#%Insects, frogs, toads, and salamanders have demonstrated bothphysical and behavioral disruptions as a result of artificial nightlighting. A majority of frog and toad species are nocturnal and,because they must remain close to a water source, are less able tocompensate for changes in the environment by relocating.Like other amphibians, salamanders are currently sufferingpopulation declines around the world. Many species of pondbreeding salamanders show strong site fidelity to their homeponds, and studies to date have shown that artificial illuminationcan disrupt salamanders’ ability to return to home pondsto breed.Artificial light at night contributes to lack of food (starvation) by interferingwith predator/prey relationships. For instance, moths and other night-flyinginsects are attracted to lights. This involuntary phototaxis leads to their easycapture. Their incessant gravitation toward artificial points of light not onlymakes them vulnerable as prey and subjects them to increased predation,but disrupts the normal nocturnal patterns of predator species by creatingan artificial feed concentration around points of light. For some species ofpredators, such as bats or birds that are not repelled by light, this disruptionmeans a change in the concentration and location of their feed, which canlead to imbalances in predator/prey ratio. For species repelled by light, suchas horseshoe bats, long eared bats, and mouse eared bats, feed becomes scarcerand difficult to procure, as many insects swarm around lights, leaving fewerto be caught as they fly free. The decreasing amount of available food due to!"## %&'()*' (,-' .%/ *01203%455-6, (,-'77789 *05038-*:

;1.!.7"# 1)-3) # *".,)?#,&*,@ & -%*)9.") %*&()&A 0)-.#!)% 71!&) ,,#! "#%%3)#!!"#4!)& *4 *&).9)/&1)#,0) 7"#!."3)- "0&5Upon discovering the magnitude of fatal bird collisions,some cities are initiating mitigation procedures.The Lights Out Toronto campaign, establishedin 2006 in Toronto, Canada calls for residentsto turn out any unnecessary lights for the protection of migratory birds. In addition, the city hasissued bird friendly development guidelines forall new buildings, which include the control ofunnecessary artificial light. In September 2008,Boston, MA, USA began a two-month initiative toconserve electricity by shutting off lights at 34 cityskyscrapers. A stated purpose of this project wasthe protection of migrating birds. Chicago, IL andNew York, NY USA also participate in a “LightsOut” during migration season.As awareness of the danger of artificial light to seaturtles grows, an increasing number of communities are restricting coastal illumination. Countriesall over the world have passed ordinances thatcontrol the amount and type of light used incoastal environments. As the list grows, hatchlingsea turtles are starting to be able to find the seawithout the help of human volunteers to guidethem. Learn more about local and regional actionby visiting www.seaturtle.org.!"## %&'()*' (,-' .%/ *01203%455-6, (,-'";1.!.7"# 1)-3)2225.99&1."* 4! "*&54. !"# %#&''()* &)% 71!&)#"*)4. .,).,).99&1."*). %) %#!9." &5a combination of habitat loss and life cycle disruption is causingmany bat populations, such as Europe’s horseshoe bat, to becomethreatened or endangered.Since the eyes of nocturnal animals are specially evolved forforaging in low-light conditions, small changes in illuminationcan compromise strategies and profoundly alter their relationshipwith prey species. Even fish are affected by artificial light. Somespecies of fish, normally exposed only to natural light sourcessuch as phosphorescence, can be temporarily blinded and leftvulnerable by artificial light. Artificial light also inhibits normalanti-predation behavior such as schooling, and can affect migratory patterns in species such as salmon and sockeye fry.Offshore, brightly lit oil and gas platforms and squid vesselsthat attract prey and affect numerous species of fish with lightspose both primary and secondary hazards to marine birds. Theillumination and heat of offshore hydrocarbon platforms andsquid fishing vessels also encourage algae growth, attracting fishand invertebrates. Marine birds are then killed around squidvessels by swallowing hooked prey or by feather contaminationin oil-fouled water at hydrocarbon platforms. Marine birds thatfeed on bioluminescent prey may be particularly sensitive to lightsource attraction, many threatened and endangered species atgreat risk from artificial ocean lighting. Many species are susceptible to fixation—also known as “capture”—on artificial lightsat sea; exhausted birds will circle for hours or days until they fallinto the sea. Off eastern Canada in 1998, tens of thousands ofseabirds were observed circling the newly operational Hiberniaplatform, fixated by an unrelenting point of illumination.77789 *05038-*:

#!"# %#&''()* #,'#-.*/0)/12#3/45*#1*#6/45*#,7#8/292/'(Light fixation is a constant bird hazard that continues to kill thousands of birds in urban areasevery year. Hundreds of terrestrial bird species fly and migrate under cover of night. Whilethe mechanisms for birds’ attraction to artificial night lighting are not well understood,its hazards to birds have been well documented. During the 1960s, it is estimated thatover a million birds a year were killed in collisions with lighted television towers inthe United States. Since that time, the number and height of communication towershas increased exponentially. Skyscrapers and other urban buildings also threaten birds,posing collision, fixation, and disorientation hazards./#01*2(3 24%(25"'* %6Artificial light at night is devastating sea turtle populations around the world for severalreasons. Studies in Florida have shown that loggerhead, leatherback, and green turtle femaleschoose the darkest beaches for their nest sites and will not nest at beaches lit by mercury vaporlights. On beaches subject to indirect light trespass, turtles will avoid the more brightly lit areas inpreference to the dark. Nests are, therefore, more concentrated in the dwindling dark spaces, causing more hatchlings to succumbto predators and other site-specific hazards.However, the most deadly problem facing these internationallyprotected sea turtles is disorientation from excessive and carelesslyplaced light. Many types of coastal illumination, including street,residential, and business lighting, confuses newly emergedhatchlings, which instinctively orient to the brightest light source.For thousands of years, this source was the reflection of moon andstarlight on the sea. The turtles’ natural programming allowedthem to reach the water safely. Today, development along coastlines can cause hatchlings to head inland instead toward artificiallights, where they die of exhaustion, dehydration, predation, androad traffic. Each year, Florida alone loses hundreds of thousandsof hatchlings.Inappropriate artificial night lighting disrupts physiologicalas well as environmental functions. Hormone production invertebrates, for example, is regulated by the circadian rhythm.Studies in humans and rats show a correlation between exposureto even low levels of illumination during normally dark hoursand depressed levels of melatonin (a hormone produced in theretina), resulting in an increased risk of accelerated growth inbreast cancer tumors. The effect of artificial night lighting onmelatonin and other hormonal systems has yet to be studied inthe wild, a study made more difficult by the scarcity of naturaldark night conditions in most Western ecosystems.While the wide range of potential damage caused by artificiallight at night is still being discovered, steps to reset the naturalbalance between light and darkness are already being taken. Tohelp preserve wildlife and minimize damage to ecosystems, startby following the steps listed in the Practical Actions to the right.A list of resources to increase knowledge of these topics and linksto information on local and regional action groups can be foundat the end of this practical guide.!"## %&'()*' (,-' .%/ *01203%455-6, (,-'&'()*#)( 2.)*#7368"Turn off unnecessary lights around your house andyard. Use timers and sensors to help put lightonly where and when it is needed.Use fully shielded fixtures to direct the light ONLYWHERE NECESSARY FOR COMFORTAND SAFETY.See red: Use red filters on house and street lights. Redlights emitting a low wavelength generally haveless of an impact on wildlife. Sea turtles andother coastal creatures, as well as amphibiansand many species of insects, react especially wellto red light—by hardly reacting at all. or yellow: Yellow lights such as high pressure sodium(HPS) or low pressure sodium (LPS) lampsattract fewer insects and moths (think of yourtypical yellow front porch bug light). If light isrequired, advocate for their use in environmentally sensitive areas such as coastal regions orforest preserves.Get educated: field guides and nature walks will helpidentify vulnerable species in your area.Raise awareness: Most people are blind to the impactartificial light has on wildlife. A presentationto a social club or activist group could increaseinterest and win supporters.Ask that any further development in your communityinclude a report on ecological issues of lightpollution in their environmental impactstatement.77789 *05038-*:

suggests that arti/cial night lighting has negative and deadly e0ects on a wide range of creatures, including amphibians, birds, mammals, insects, and even plants. Humans have evolved as diurnal animals, biased toward the daytime and dependant on visual cues, so illumination of our nigh

A Measure of Success